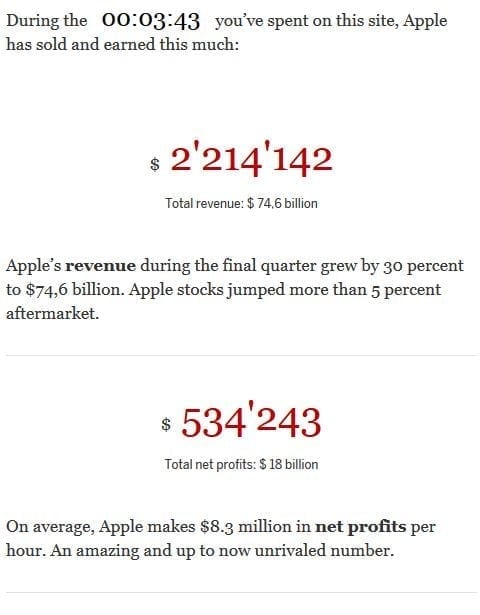 When Apple announced its sales results for the Q1 2015, everybody expected big numbers. But nobody could have predicted what came next. Apple reported a net profit of $18 billion, the biggest ever profit recorded by any public company in history. If you still can’t get your head around it, we’ve found an interesting visualization that shows how many iPhones, iPads and Macs Apple is selling every second, and how much it’s earning. It is based on Q1 2015 data. 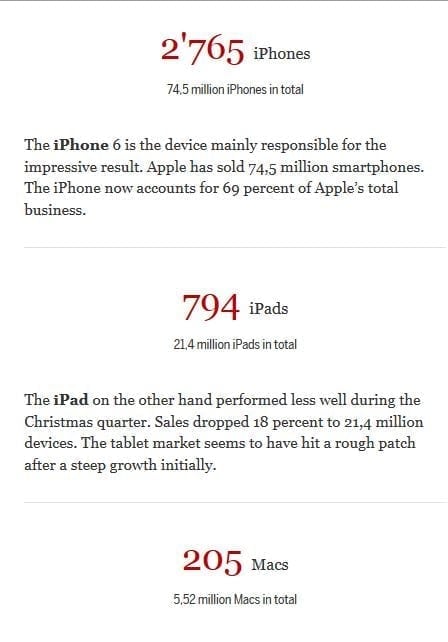 The total recorded revenue for Apple was $74.6 billion (Q1 2015) as compared to $57.6 billion (Q1 2014) just a year before. The previous record was held by ExxonMobill at $15.9 billion. The main seller for Apple, no surprises here, was the iPhone 6 and iPhone 6 Plus, which sold over 74.5 million units during the recording period from October to the end of December. The announcement caused a 5% increase in Apple’s share price on Wall Street.

While the sale of the iPhones increased greatly, the iPad did not fare as well, with sales falling 13% from last year to $13.2 million even though the new iPad was released in October at the start of this recording period. Analysts blamed this on a declining tablet market which was at its peak a couple of years ago, along with the rise in phablet sales and the consumer population not being impressed by the upgrades made to the latest iPad.

On the other hand, Macs did well in a declining market and somehow managed to sell 18% more than last year. The total number of Macs it managed to sell were 5.5 million.

If you’re still coping with this news and struggling to visualize this data even after looking at all the graphs the internet has managed to give you, take a look at this handy new visualization.

We couldn’t embed it here so you’ll have to head over to the website in order to view it. It shows Apple’s sales and revenue increasing and the amount of iPhones, iPads and Macs being sold by the second. If its possible it’s even more mind blowing than reading the numbers in any news article. After I opened the site, it had crossed $200,000 in sales before I’d had a chance to look at the whole page. Also, it just took Apple 3 and a half minutes to cross $2, 200,000 in sales and earn a profit of half a million dollars. 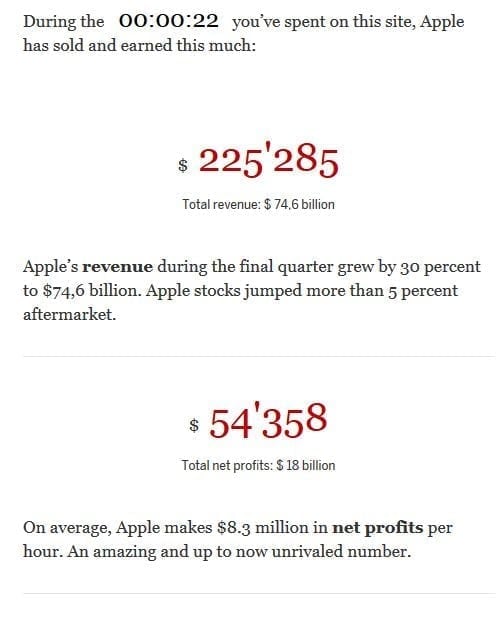 We strongly urge you to check out this totally cool visualization and have some fun with it. Apple says it’s aiming for even more in the future. They’ve already broken one record, let’s see if they can trump this.