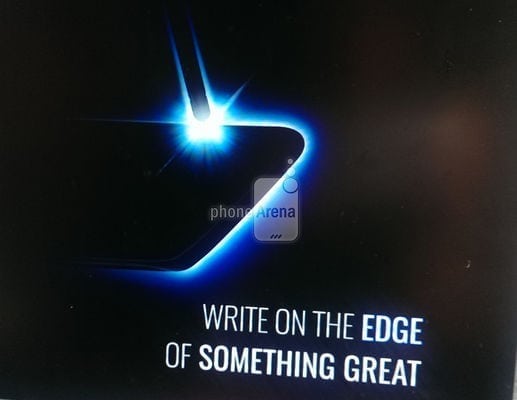 Alleged teaser for the phablet confirms some perplexity related to the next version of the Samsung Galaxy Note. The reported teaser of Samsung’s next-gen Galaxy Note has surfaced online which seeks to put all rumors to rest. According to the latest revelation, Samsung is calling this year’s Note iteration the Galaxy Note 7, which we have already heard of.

The teaser has been shared by PhoneArena, after obtaining it from its source .The teaser says, “Write on the edge of something great.” This, coupled with the position of the stylus in the image near the edges also hints towards the ability to finally write on the curved edges of the screen.

However, the South Korean tech giants have not confirmed or even teased anything about this handset yet so it’s best to take rumors with a grain of salt for now.

Samsung’s reported decision to skip the Note 6 name in favor of Note 7 is attributed to the company’s desire to make the model number of the new Note consistent with the Galaxy S7. It is suggested that Samsung was apprehensive that consumers might look at the Note 6 name and conclude that it carries last year’s design.

As for the specifications; earlier reports suggested that it features a 5.8 in Super AMOLED screen with QHD resolution at 1440 x 2560 pixels. It would be equipped with Snapdragon 823 chip featuring a quad-core processor, which would be coupled with Adreno 530 graphics unit.

Moreover, we can expect 6GB mobile DRAM under the hood, which the company unveiled at the 2016 Samsung Mobile Solution Forum held in Shenzhen, China. Other key elements are a 12-megapixel rear camera and iris scanner, for which the company has filed registration of the trademark in the European Union. The next Galaxy Note flagship is likely to be announced in the first week of August.