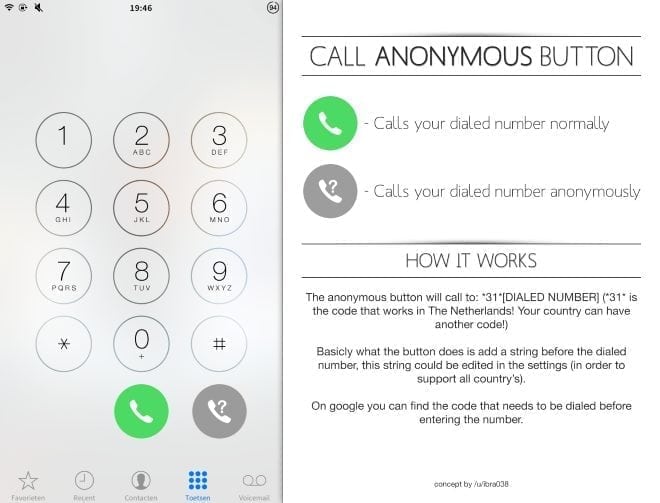 We have never before covered concept jailbreak tweaks, but we will make an exception for this one since we like it so much! The concept is called Call Anonymous Button, and it should theoretically allow you to make anonymous calls from iPhone, using the stock Phone app.

The concept uses the feature that quite a few country’s telephony systems have: the ability to make anonymous calls by adding a pre-defined number before the actual number you want to call. Netherlands, for example, uses *31*; calling *31*[number to dial] would call said number but the recipient of the call will not see the caller’s ID. Similarly, the United Kingdom uses *141*, and the United States of America uses *67.

This is useful for a number of reasons. Sure, you can use it for prank calls, but if you have outgrown such buffoonery, here are some legit use cases to make anonymous calls from iPhone:

Of course, this is just a concept at the moment. Reddit user ibra038 – the person who came up with this design idea – is all up for collaboration with a developer to make this ‘make anonymous calls from iPhone’ concept a reality. You can check out the official thread over on Reddit here. It includes interesting discussion on how to improve upon the app’s design, and how to develop it.

We will of course cover the ‘make anonymous calls from iPhone’ jailbreak tweak when it is made for reals. Stay tuned to Cupertino Times!

jailbreak tweaksphone
Previous ArticlePhoto Organizer 8: Sort Photos In iOS 8 By Size, Creation Date, And MoreNext ArticleRise & Shine Alarm Clock Only Turns Off When You Smile In The Morning