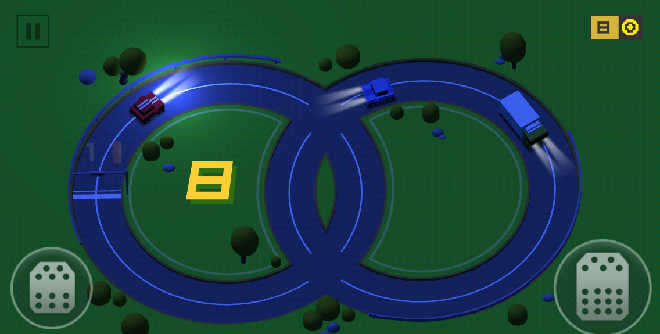 Fun should be a thing that never ends. We should be able to have fun all the time. It should be infinite. Well, that’s exactly what Gameguru has done. In there new game, Loop Drive, one must drive infinitely around a street shaped like the infinity symbol. Maybe the name of the street is Infinite Loop but there seems to be no Apple Headquarters anywhere near the street.

While only a certain amount of you geeks understood my joke back there, Loop Drive is an amazing, single player, mobile game available on both Android and iOS. The object of the game is to successfully drive around your half of the infinity-shaped road without crashing to any of the oncoming cars. There is a specific speed that your car will go if left untouched. By holding the right side of the screen, the car will accelerate until it has reached the maximum speed that it can go and will continue to drive at that maximum speed. The left side of the screen is basically the brake for the car but will not take you to a complete stop. Instead, the car will genuinely slow down until it drives at a very slow speed. By doing this, the game becomes more challenging in where you have no control over stopping the car completely. Basically, if you don’t slow down at the right time, you’re going to crash. You have to experiment with your distance and your time.

The car being controlled can be modified to be different cars from the Garage. Some cars available include the Red Car, Black Car, Green Car, Taxi, and the School Bus. Simpler cars, like the Black and Green, and be bought for 250 coins. Fancier cars, like the School Bus, range from 500 to 5,000 coins. There are also bikes, a llama (I don’t know why), a skater, and Rebels (basically jaywalkers). The bikes cost 2500 coins, the llama costs 5000 coins, the skater 10,000 coins, and the Rebels as well. There are some characters that if bought using your billing account, the ads will be automatically removed. Coins are redeemed by playing the game. Depending on the amount of times you went around the road, that’s the amount of coins you will earn.

My high score is 21 and if you can beat that, leave a comment and tell us how much you got. Make sure to check out more apps by Gameguru and check back for more game and app reviews.