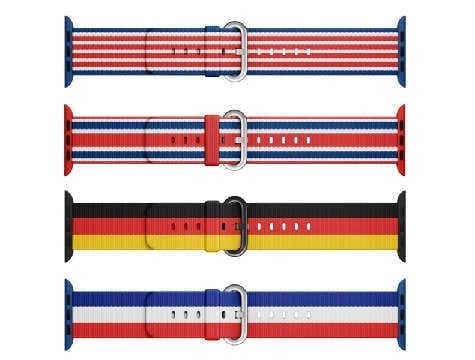 2016 Rio Olympics is just around the corner and companies all around the world are busy celebrating the event. Apple has also launched Limited edition Apple Watch bands for the event.

Apple watch was the first smartwatch launched by the company. The Apple watch is available in two different sizes. Customers can personalize their smartwatch with different bands. Hermes and Coach have also partnered with Apple to produce bands for Apple Watch. Moreover, for more design users can also buy third party bands.

Jony Ive, Apple’s senior vice president of design said “With Apple Watch, we’ve developed multiple technologies and an entirely new user interface specifically for a device that’s designed to be worn. It blurs the boundary between the physical object and user interface.”  He also added: “We’ve created an entire range of products that enable unparalleled personalization.”

Apple has now launched new bands for all the sports fanatics out there.  The design of the bands is based on the national flag of 14 countries. These include the U.S., the UK, the Netherlands, South Africa, New Zealand, Mexico, Japan, Jamaica, Canada, China, Brazil, Australia, Germany, and France. Customers can support their country by wearing the limited edition Watch bands. GQ posted pictures of all 14 watch bands online.

According to the reports, different types of nylon were used in the production of the band. The band displays  different color on both sides.  Each loop of the band is designed such that it matches the theme.

The limited edition watch band is available for $101 (approx. 329 Brazilian Real). We will surely see a lot of customers buying these bands to support their country. However, only a few people will be able to buy them since the band is available only in Apple Store at VillageMall in Barra da Tijuca in Rio.

Well, we will have to wait and see if Apple launches these bands in other parts of the worlds or not.