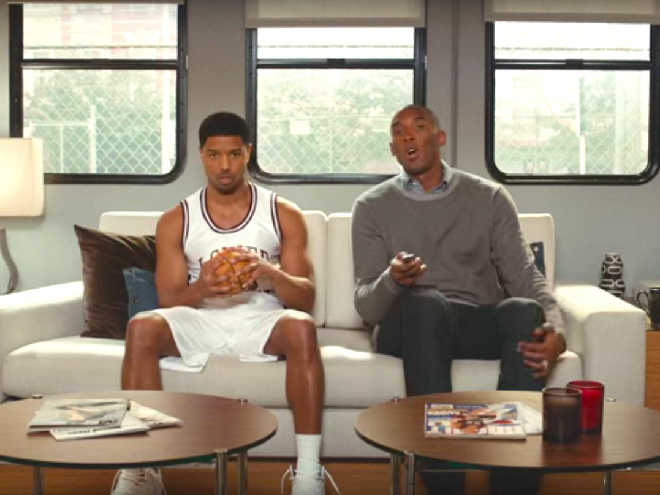 As you might know, Kobe Bryant is retiring this year. So in his honor perhaps Apple rolled out yet another advertisement which stars basketball giant Kobe Bryant as well as actor Micheal B. Jordan.

The advertisement is named ‘Father Time’ and it shows how you can interact with Siri through Siri Remote. Both, Jordan and Bryant are seen as bickering while using Apple TV in a trailer. Jordan is shown as shadowing Bryant for a film about the life of the famous player from the Lakers. So naturally Mr. Bryant shows Jordan a clip of a younger version of himself on the basketball court as he assumes that only his earlier years will be shown in the film. He does this by saying “Siri, open the NBA app.” He then tells Jordan that “That’s the guy you’re playing.”

Jordan then says that I’ll be playing you as  “a hero on the verge of a steep decline.” Then he tells him that he will be playing Bryant “all the way through”.

Bryant gets a little annoyed when Jordan shows him a scene from ‘The curious case of Benjamin Button” at 20 min and 36 secs when Benjamin is seen in his old man avatar. About the wrinkly, old face of Benjamin Button Jordan says “Now that’s the guy I’m playing in this movie.” Kobe Bryant then proceeds to kick Micheal B. Jordan out of his trailer in annoyance.

In the advertisement, we are shown how to surf on the television to scrounge more watchable content and we are also shown the method to rewind content. We absolutely loved the advertisement and thought it a fun way to reach more potential Apple customers. You can watch the new advertisement here and don’t forget to tell us what you think about it? Yay or nay?