KeyboardVibrate8 is a jailbreak tweak that turns on vibrate on touch for keyboards – AKA haptic feedback – on Apple devices running iOS 8.

When the age of smartphones dawned upon us, we suddenly has to cope with hard buttons beneath our fingers being replaced by sensitive, capacitive touch screens. While some people didn’t take too much notice of this fact, others were slightly unnerved by this and wanted to feel at least something that would let them know that their touch had been recorded (especially with the not too great touchscreens of initial smartphones).

In Android devices, the vibrate on touch option or ‘haptic touch’ feature has always been available, in fact it’s enabled by default when you buy one. Hence most people don’t even realize how used to this they are until they have to do without it.

For Apple devices however, haptic touch has never been an option so users probably got used to the lack of feedback a long time ago. However for those just making the transition (Apple recorded the highest conversion rate ever from Android to Apple in the past quarter), it’s bound to be a little annoying.

Thankfully users can now get the feature on any Apple device running iOS 8 or above using KeyboardVibrate8, a just released jailbreak tweak that will enable this option for the keyboard on your iPhone or iPad. Simply speaking, every time you type a character, the phone will vibrate slightly in your hands and give feedback that your touch has been recorded. You can even change the intensity of vibration using the app (just remember to hit the respring button when you do). We tested it with the default keyboard on iOS 8 and it works, but we’re not sure whether it will work with third-party keyboards like SwiftKey. And best of all it’s free, a simple app to solve a simple problem. 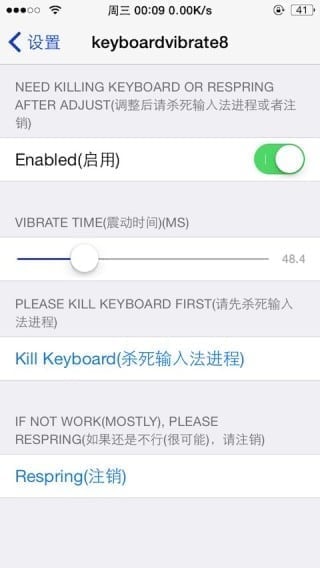 Unfortunately as mentioned above it’s a jailbreak tweak and will work on jailbroken devices only. If you want to jailbreak your device and explore this app along with the millions of others that are available for only jailbroken devices, you can try the TaiG tool for Windows users or the PP tool for Mac owners. Keep in mind that your iOS device must be between iOS 8.0 and 8.1.2 to be eligible for jailbreaking. iOS 8.1.3 and later has no jailbreak tool available at the moment.

The app itself can be downloaded from Cydia under the BigBoss repository. Just open Cydia, search for KeyboardVibrate8 and you should see it in the results.