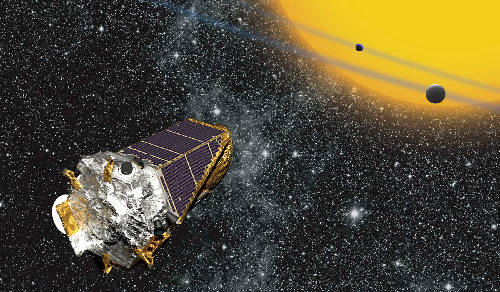 This confirms the scientists’ theory that there exist other suns like ours. Suns that are a suitable distance from a surface that allows liquid water to pool on the surface.

“On the 20th anniversary year of the discovery that proved other suns host planets, the Kepler exoplanet explorer has discovered a planet and star which most closely resemble the Earth and our Sun,” said John Grunsfeld, associate administrator of NASA’s Science Mission Directorate at the agency’s headquarters in Washington. “This exciting result brings us one step closer to finding an Earth 2.0.”

By March of this year, the Kepler mission alone has verified the existence of 1,284 new planets. This is the single largest finding of planets to date.

“This announcement more than doubles the number of confirmed planets from Kepler,” said Ellen Stofan, chief scientist at NASA Headquarters in Washington. “This gives us hope that somewhere out there, around a star much like ours, we can eventually discover another Earth.”

According to the analysis performed on the Kepler space Telescope’s planet catalog which identified 4,302 potential planets. 1,284 if these had a probability greater than 99 % so they qualified being called planets. 707 are more likely to be some other astrophysical phenomena. As for the remaining 1,327 candidates, there is a high chance that these are planets but do not meet the 99 % criteria so cannot be termed as planets just yet.

“Before the Kepler space telescope launched, we did not know whether exoplanets were rare or common in the galaxy. Thanks to Kepler and the research community, we now know there could be more planets than stars,” said Paul Hertz, Astrophysics Division director at NASA Headquarters. “This knowledge informs the future missions that are needed to take us ever-closer to finding out whether we are alone in the universe.”

In the new batch of the validated planets, almost 550 of them have the probability of being rocky planets like or Earth based on their size. 9 of these planets lie in the habitable zone of their sun. This takes the total number of exoplanets that could support life to 21.

“They say not to count our chickens before they’re hatched, but that’s exactly what these results allow us to do based on probabilities that each egg (candidate) will hatch into a chick (bona fide planet),” said Natalie Batalha, co-author of the paper and the Kepler mission scientist at NASA’s Ames Research Center in Moffett Field, California. “This work will help Kepler reach its full potential by yielding a deeper understanding of the number of stars that harbor potentially habitable, Earth-size planets — a number that’s needed to design future missions to search for habitable environments and living worlds.”

There have been almost 5,000 planet candidates that have been found to date. Around 3,200 have been verified of which 2,325 have been discovered by Kepler. NASA plans to use the same method employed by the Kepler on a much larger scale by the year 2018. Its purpose is to find a planet that could support life as it exists on Earth.