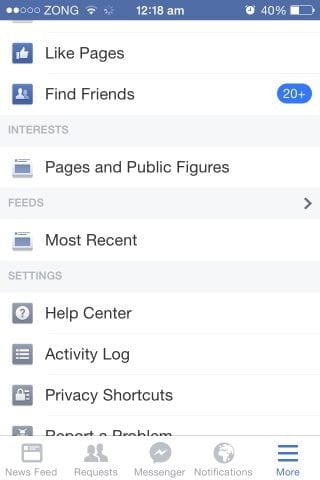 Facebook let’s you sort your News Feed by “Top News” or “Most Recent” posts, but they hide away the latter option deep in settings. Here’s how you can easily enable Most Recent News Feed sorting in the Facebook app for iPhone and iPad!

Back in the good old days when people had no more than a few dozen friends, and a handful of pages, Facebook’s News Feed was presented in a simple reverse chronological order. The latest posts first, followed by older posts.

This worked until everyone and their grandmom joined Facebook, and started producing regular content in the form of status updates, vacation photos, relationship updates, etc. Facebook pages were a major reason why the News Feed became too… noisy. To counter this, Facebook introduced the ability to sort News Feed by “Top” News. No one except the engineers at Facebook know _exactly_ how it decides which posts are shown / not shown.

Over time, Facebook has hidden away Most Recent sorting deeper and deeper into Settings. This displeases a relatively small but still appreciable fraction of the Facebook userbase. Thankfully, there is a simple way to get Most Recent sorting back. It is in the form a jailbreak tweak called RecentFacebook.

If you have jailbroken your iOS 8 device, simply search for RecentFacebook on Cydia, download and install it for free. Once done, your Facebook News Feed will now display posts in reverse chronological order; no fancy algorithms will be pushing you into a filter bubble! You won’t have to regularly come back to select Most Recent every time you launch Facebook for iPhone or iPad.

RecentFacebook is a tad buggy at the moment. So keep that in mind before you install it! The developer is active, though, so we expect any of the little bugs to be gone in a few days time.

If you want to switch back to Top News, you can do so from More tab > Feeds > Top Stories. We initially thought this would require uninstalling the tweak itself.

facebookjailbreak tweaks
Previous ArticleHow To Use PS4 DualShock 4 With iPhone & iPad On iOS 8Next ArticleGameBoy Advance Emulator GBA4iOS Is Now Working On iOS 8.1 Without Jailbreak