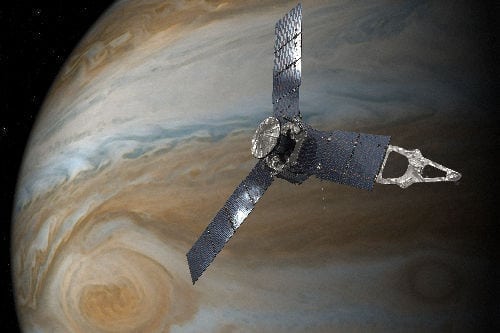 We are aware of the crimson-colored raging storm clouds on the surface of Jupiter. These clouds alone are bigger than our planet itself. We know the cloud from the surface but are unaware of its depth. That was before the recent plunge by Juno spacecraft which has brought new information to light.

This giant red spot appeared 350 years ago and was twice the size of Earth in 1979 but is now gradually shrinking and is now only 1.3 times the diameter of our planet. The Juno spacecraft passed over the planet back in July and took a series of stunning photographs. It also directed all its sensors towards the storm that has allowed us to look into its depth for the first time.

“One of the most basic questions about Jupiter’s Great Red Spot is: how deep are the roots?” says Scott Bolton, principal investigator on the Juno project. “Juno data indicate that the solar system’s most famous storm is almost one-and-a-half Earth-wide, and has roots that penetrate about 200 miles (320 km) into the planet’s atmosphere.”

Andy Ingersoll, co-investigator on the Juno project, further says. “Juno found that the Great Red Spot’s roots go 50 to 100 times deeper than Earth’s oceans and are warmer at the base than they are at the top. Winds are associated with differences in temperature, and the warmth of the spot’s base explains the ferocious winds we see at the top of the atmosphere.” 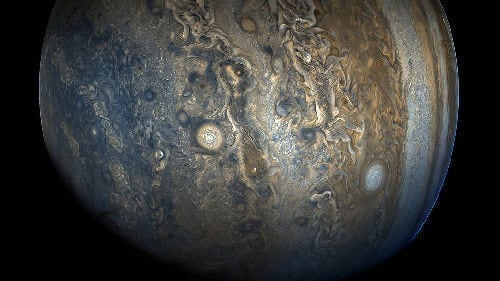 The Juno mission has also discovered two new radiation zones on the giant planet. Juno’s Stellar Reference Unit (SRU-1) detected extremely high noise signatures in images gathered by the team’s radiation monitoring investigation, as the craft passed through Jupiter’s electron radiation belt. The signatures are those of a high-energy heavy-ion population, but the team isn’t sure yet which particles are responsible or where they come from.

The second radiation zone is much closer to the planet’s surface and lies near the equator. There, energetic hydrogen, oxygen, and sulfur ions zip around at close to the speed of light.

“The closer you get to Jupiter, the weirder it gets,” says Heidi Becker, radiation monitoring investigation lead on the Juno program. “We knew the radiation would probably surprise us, but we didn’t think we’d find a new radiation zone that close to the planet. We only found it because Juno’s unique orbit around Jupiter allows it to get really close to the cloud tops during science collection flybys, and we literally flew through it.”

Check out this animated simulation of inside Jupiter’s crimson storm.

JunoJupiterNASASpacecraft
Previous ArticleGoogle Maps Alerts You Of Your Stop On Public TransitNext ArticleHuawei Honor 9i: The Champion Of Sub $300 Smartphones