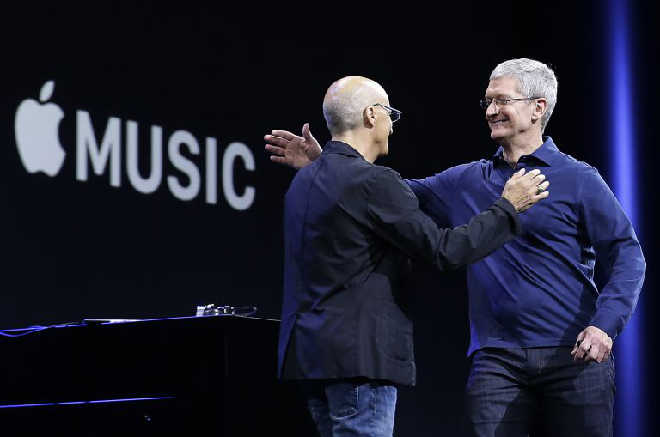 Apple Music’s CEO and Interscope Records creator, Jimmy Iovine left the whole of twitterati furious after his appearance on CBS This Morning. Mr Iovine appeared on the show to promote the curated playlists provided by the music streaming service. He appeared alongside Mary J Blige who appeared in an advertisement that was produced by Selma director Ava DuVernay to promote the feature on the Emmy Awards 2014. The one-minute long commercial starts off by showing Kerry Washington, Taraji P. Henson, and Mary J. Blige sifting through old mix tapes and dancing to songs by Slick Rick, Phil Collins, and Puff Daddy. Blige then talks about how easy the playlisting feature makes it to create playlists as compared  to manual mixtape-making back in the day, but then Washington gushes, “It’s like you have a boyfriend that makes you a mixtape – in your laptop!” Moments later the words “INSTANT BOYFRIEND MIXTAPE SERVICE” flashes on the screen.

He said, during his interview, that the service will now be easier to use as women find it ‘difficult’ to find the music they like. He said, “I always knew that women find it very difficult at times – some women – to find music. And this helps makes it easier with playlists, curated by real people.”

Whilst explaining why Iovine chose Kerry Washington, Taraji P. Henson, and Mary J. Blige for the advertisement he stated that “I just thought of a problem: Girls are sitting around talking about boys. Or complaining about boys, when they have their heart broken, or whatever, And they need music for that, right? It’s hard to find the right music. Not everybody knows a DJ.”

So you can imagine the kind of reaction these statements brought forward from people.

However later Mr. Iovine apologised for his statements. He told Billboard: “We created Apple Music to make finding the right music easier for everyone — men and women, young and old. Our new ad focuses on women, which is why I answered the way I did, but, of course, the same applies equally for men. I could have chosen my words better, and I apologise.”