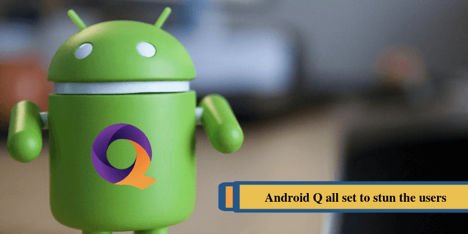 Detailed reports have been coming out regarding Android Q which contains new, purported Android Q features. We are not sure which of the features will definitely be offered in Android Q, like 3D facial recognition. Also, rumors have already stated that Google’s Pixel 4 may contain a Face ID-like front camera. Though this is just one of the most talked about expected features. There are many more like this. In this article, we will focus on a few of the top Android Q features that are expected to amaze Android users.

One of the most talked about features of Android Q is ‘Dark Mode’. Android Q is expected to have a system-wide Dark mode. Google has already given quite a few hints that make strengthen the fact that dark mode might be a part of Android Q. Google had introduced Dark Mode to many mobile applications already. Now, the company is planning to make it a part of their entire operating system.

In order to set dark mode, you will just have to go to Display settings and there, you will get the option to enable dark mode. With the help of Automation, you will also be able to change to dark mode. This is one of the most interesting features and we might be seeing this feature added to Android Q very soon.

Every new version of Android is expected to have improvements to security. In Android Q, will focus on making the Operating System a lot more secure. Android Q may offer a highly advanced and safe way of saving data on micro SD cards. This will be done to restrict third-party mobile applications from gathering personal information which can be saved on the external storage. The safety feature will restrict mobile applications from using any photos, videos or even the location data for the photos. Not just that, access would be restricted to music files. This is indeed a great way to protect user data from being accessed without permission.

In Android Q, there are many additions for the developer which can be made available to users as well. The capability to set freeform windows might be there. Also, plenty of the latest options like a built-in screen recorder shortcut, Game Update Package Preference and a lot more might be added to the new version as well. Also, some of the Android app development professionals have said that there are plenty of additional features like the incorporated screen recorder in Android Q. Game Update Package Preference is one of the most anticipated options to stun the Android market.

Android Q is anticipated to contain plenty of groundbreaking features. One of them is screen recording. Android Q might contain a superb new feature that will contain a system level screen recording option. With this feature, you would be able to record video on the screen of your phone. There will be a live notification present on the top of the screen as well. This will help the user to pause, stop, start as well as share the video. At the same time, the user would be able to record a voiceover for any of the clips which they record.

Android Q is expected to have a whole lot of features that will bring in a lot of newness to the Android-based handsets. Though, there have been many rumors, not only when the operating system will be available.  Only then we will be able to see what it has got!

More on this topic: Best Tips to Develop a Successful Mobile Game App for Android