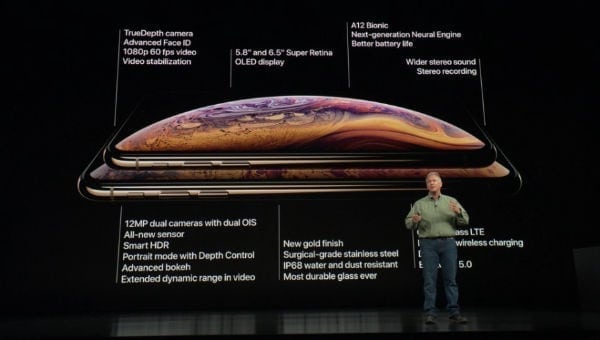 On September 12th at 10 AM Pacific time, Apple began its fall event at the Steve Jobs theater at Apple Headquarters in Cupertino, CA.

I was not expecting to be impressed. Silly me. Just when I thought Apple has hit a development ceiling for their flagship smartphone, they showed me and everyone else in attendance a thing or two.

In keeping with the tradition of humorous videos at the beginning of Apple Events, a Mission Impossible theme has an athletic Apple employee frantically making her way, running, biking and dealing with obstacles along the way to get to the event before it begins. The mission,  delivery of all things, the highly coveted presentation clicker, just in the nick of time. A nice icebreaker.

Tim Cook begins by providing some historical perspective on Apple’s innovations and segueing into the discussion of Apple Retail and iOS and how this technology has provided such a personal experience. And then there were the product announcements. 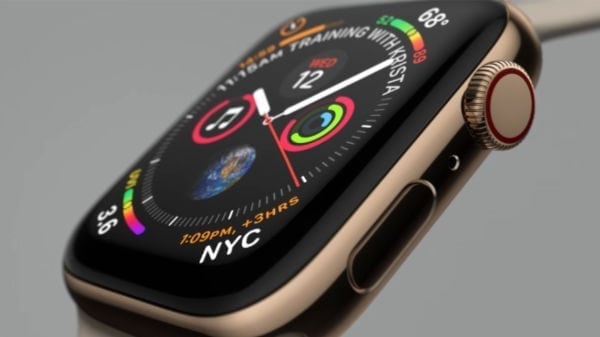 Apple Watch Series 4 and watchOS5 took the stage and Tim reported that Apple Watch has become the number 1 smartwatch in the world.  Completely re-engineered with a thinner design and new display. A smaller bezel and larger edge-to-edge viewing area that is 30% larger. New watch faces include Fire, Water, and Vapor to name three and they are beautiful.

The digital crown now includes haptic feedback.  The speaker is 50% louder. The processor has been upgraded to a 64 dual-core S4 chip and there is 18-hour battery life.

The three main areas of focus presented were connectivity, fitness and workout monitoring and health monitoring.

Stay connected with cellular,  walkie-talkie or messaging. You can now add love ones to your watch face to connect with them instantly.

A new accelerometer and gyroscope allow for new and more accurate workouts. It keeps you active with fitness and workout monitoring. The Breath app is now a watch face.

The new heart features can now tell you if your heart rate is too low. Heart rhythm can be screened in the background to detect atrial fabulation. Electrodes have been added to allow you to take an electrocardiogram, ECG anytime and anywhere. Clearance from the FDA makes this the first approved consumer ECG device.

The new accelerometer and gyroscope allow Apple Watch series 4 to identify a fall.  Falls, trips, and slips are detected and if the watch detects that you are motionless for one minute after one of these events it will initiate an emergency call.

The new Apple Watch comes in Silver, Gold, and Space Grey. There is also a Stainless and a gorgeous Gold Stainless model. It will be available as soon as September 21st.

The iPhone has enjoyed a 98% satisfaction rate in recent years. The new iPhones are sure to maintain if not surpass that metric.

The iPhone Xs stainless steal gold finish is beautiful. With an edge to edge 5.8 Super Retina OLED display with 2.7 million pixels. iPhone Xs has rounded corners and it is covered with durable glass.  It comes in Gold, Silver, and Space Gray. It’s waterproof and tested in two meters of various liquids for up to 30 minutes.

But look beneath the surface for the real story.

Stereo Sound is now improved with new speakers that deliver sound in a wider stereo field.

Face ID is on board and made possible with the True Depth camera system. Introduced last year in iPhone X the True Depth camera system is an amazing set of technologies in such a small package. It includes an infrared camera, flood illuminator, proximity sensor, ambient light sensor, speaker, microphone, front camera, and dot projector. This makes it possible to simply glance at your phone to access it while keeping your personal data private. Improvements to this system are the faster algorithms and faster secure enclave. Apple claims that it is “the most secure facial authentication ever in a smartphone”.

Apple’s A-series chip provides the power necessary to run this pocket-sized supercomputer. The latest version of this powerhouse is the A12 Bionic. This is a 7-nanometer chip (the first in the industry). It is packed with 6.9 billion transistors. On board are a 4-Core GPU, a 6-Core CPU, and an 8-Core machine learning Neural Engine. The processing power of the A12 Bionic is staggering at 5 Trillion Neural Engine operations per second. The A12’s storage controller makes it possible to have up to 512 GB of storage on the new iPhones. The A12 Bionic helps apps to launch 30% faster.

The features that make use of machine learning get a boost from the A12 Bionic. Real-time machine learning is especially important for the camera app for depth of field and lighting in portrait photos. Also for 3D Face Mapping using animoji during a live FaceTime call. Or in various AR applications.

SIRI Shortcuts allows you to create a string of tasks that are grouped into a shortcut and have SIRI execute with a simple voice command.

CORE ML with improved performance up to 9X faster while using 1/10 the energy which is useful for Augmented Reality experiences.

AR Quick Look allows you to grab 3D objects and place them in the real world through your iPhone’s camera.

Blades from Bethesda Game Studios is a visually rich first-person role play game that is deep with stories, quests and lots of action. It performs incredibly well with rich visuals and lighting effects on the new iPhone with advanced lighting and sound. 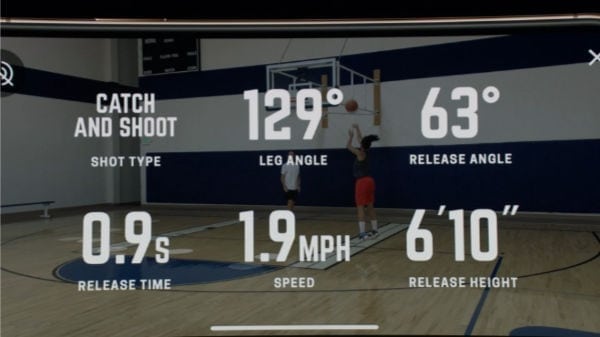 Core ML is put through its paces with Home Court. This is a real-time basketball shot science app that tracks a shooter on the basketball court and their shots. The app recognizes the court, the basket, the ball, and the shooter and tracks the shots. It logs the number of attempts and successful shots. It also tracks what the developer calls “Shot Science” which tracks the shot type, leg angle, release angle, release time, speed, and release height for every shot made. There are no sensors on the court, the shooter or the ball. Its all done in the new iPhone. Knowing these metrics can really help improve your game and was never possible before. 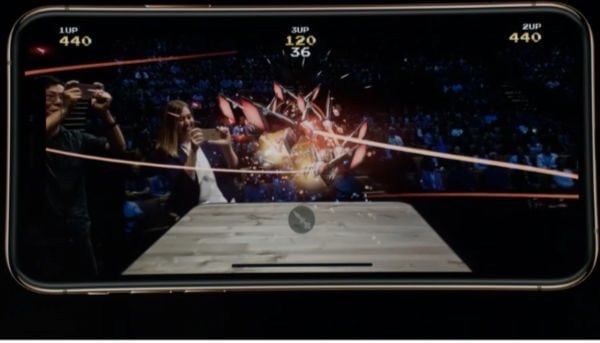 Directive Games, Galaga AR demonstrated how ARKit 2 allows multiple players to share an AR arcade game experience anywhere, at much higher fidelity rendering scenes that were not possible before.

In the front, there is the True Depth 7 MP camera system that includes the RGB f/2.2 lens and faster sensor, an IR camera with an advanced image sensor and Dot Projection.

There is a lot going on when you shoot a photo on the iPhone. In fact, 1 trillion operations are possible with every photo. Smart HDR takes multiple frames with each shot at different exposures and merges the best to produce the most clarity and skin tones and more. You can even adjust the Bokeh or depth of field after a portrait shot has been taken, which is a first for any camera.

All this applies to video as well where you can now also record stereo sound in your 4K videos.

Dual Sim capability allows you to have two phone numbers on the same phone or facilitate two different carriers when traveling.  There is also eSIM technology which is an Apple standard a number of carriers will be supporting in the coming months.

This is the lower-priced iPhone that has been anticipated but it really is just about as powerful and feature-rich as the Xs and Xs Max.

It has a large 6.1” edge-to-edge LCD display known as Liquid Retina.

Additional features include Haptic touch, True depth camera with all the same tech in the Xs,

Face ID, Faster Secure Enclave, the A12 chip, a single lens 12MP camera with True Tone Flash. It has the same advanced Bokeh features as the Xs, and it has the same camera on the front.

In addition to these new iPhone and Apple Watch announcements, we learned that Apple is now running on 100% renewable energy worldwide, and this includes their data centers.

Recycled tin and bio-based recycled plastic are now being utilized in their products to reduce mining or production of these materials.

We were introduced to Daisy, Liam’s sister who can recycle 9 different models of iPhone.

HomePod now supports the stereo pairing of two HomePods. You can now search by lyric, Ping other Apple devices, and use SIRI Shortcuts.

There was also mention of a tvOS update.

macOS Mohave will be released on September 24th.

And an updated App Store.

This was truly an exciting presentation that shows Apple has been hard at work to maintain its reputation as a maker of superior electronics. This new lineup of iPhones and Apple Watch will hopefully be enough to offset the potential damage to Apple’s sales in China. About 25% of Apple sales come from China so it will be interesting to see if the company can maintain the gains it has made in light of increased competition in the region and the politics surrounding trade and tariffs.

Good luck Apple, and thank you for all you do.

More on this topic: The Raw Materials In iPhones And Other Smart Devices