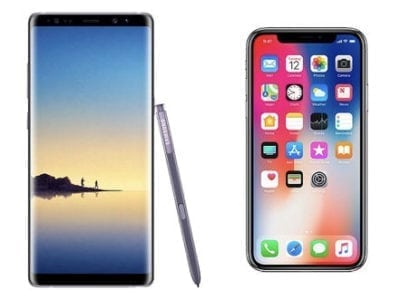 Apple fans are convinced the new iPhone X is an unbeatable masterpiece. It packs the best and latest from the device maker so far. It is the biggest cellphone from the manufacturer and promises even more compelling experiences. However, at close to a thousand bucks for a base model, it has buyers scratching their heads on what else is on offer. One of the nearest candidates being touted is the Samsung Galaxy Note 8.

Released just months apart, the lowest-priced Note 8 is going for $869. Besides the well over a hundred dollar price difference, there are several key areas worth paying attention to when comparing the two devices. Let us briefly look at some of them.

The iPhone X features a new iOS 11 that is leaner and better at managing multiple concurrent tasks. The software comes with creative navigational gestures and a whole set of new emoji. It also gets rid of the home button. The Note 8 also features the latest Android Nougat. However, it contains significant bloatware and still lags behind the iOS in process and memory management.

The iPhone X is the biggest phone the maker has ever released. At 5.8 inches, it is closer to the phablets that Samsung is famous for. The iPhone has also upgraded the pixel density as well as the resolution and white balance. However, this is no match for the Note 8’s Super AMOLED screen technology featuring a 521ppi display at 6.3 inches.

Both devices are made of a glass housing held in place by a metal frame. They feature a bezel-less type of display. The iPhone X is slightly smaller and lighter with a firmer grip in hand even without a case. The Note 8 has five color options compared to the iPhone’s two.

The two devices can easily do 4K HD video quality. While the quality may look slightly better on the iPhone X, the Note 8 can hold more recordings of both audio and video with the expanded storage slot. Both feature custom wireless audio with the headphone jack distinctly absent on the iPhone X.

Apple continues to set the pace with device security in the iPhone X. It features an intelligent face identification technology that is superior and convenient. The Note 8 introduced face scanning and maintained the traditional fingerprint scanner but it’s still playing catchup.

The iPhone X has an upgraded processor with custom components. Coupled with the leanness associated with the upgraded software system, it delivers better performance in actual use. The Note 8 features double the memory on specs but Android still struggles with process and memory management. The Note 8 wins the storage battle only because it features an expandable slot.

The iPhone has a slightly smaller battery. However, this is eclipsed by the operating systems. Android is a known memory and battery hog. The upgraded iOS 11 is even leaner and packs it tight in all the right places. Samsung has, however, made decent steps to get out of the battery episodes experienced with the previous Note 7.

About the author: Noelle Neff is a professional photographer covering niche markets. She graduated from the University of Miami and is based in the same city. Noelle Neff is also a renowned blogger on topics such as photography and travel. You can also find some of her shots at various online stock photo sites.