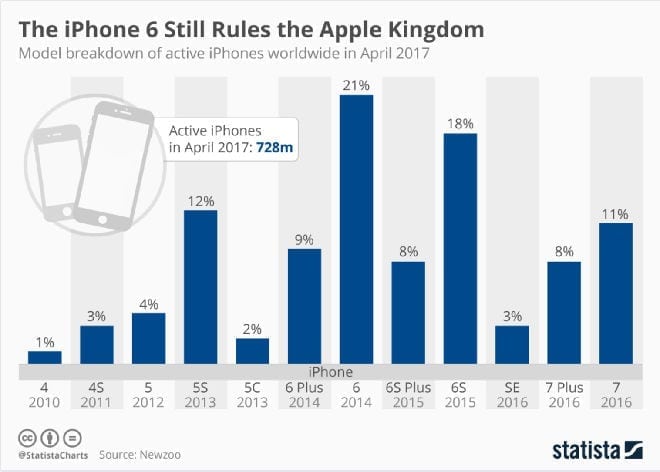 Apple has sold over 1.1 Billion iPhones since it was released in 2007.  This one product has clearly been responsible for the company’s mega success. At this point in time, there are multiple versions of the iPhone still in use. Many argue that the iPhone is too expensive which could explain why so many iPhone users are holding on to theirs. After all, it is a high-quality product that is built to last so why not hold on to it?

iPhones are usually on a 2-year upgrade cycle. Many iPhone users will upgrade to the latest and greatest. But like many cars, for example, we tend to hold on to quality products longer than a manufacturer may wish. The infographic shows us that 21% of the iPhones in use today are the iPhone 6.

An interesting comparison is the iOS 10 adoption rate which is at about 80%. This speaks favorably of Apple’s efforts to make its software run on older devices as much as possible. This also contributes to the iPhone’s longer life span.

How Will This Change In The Fall?

The infographic above will change once the next iPhones are released later this year. But by how much?  There are rumors circulating that the next top-of-the-line iPhone will sell for as much as $1400.  This may very well be true since it is expected that Apple will be releasing at least 3 new iPhone models this fall. There is no official word on the pricing for the new iPhone lineup. This big price tag on the top iPhone is still only a rumor and one I hope is proven to be untrue.

I held on to my iPhone 5 for over two years and I will likely do the same with my iPhone 6s. It works beautifully and does everything I need it to do and does it very well. It will be interesting to see what this picture looks like and which iPhone dominates a year from now.

appleiPhoneRumorsusers
Previous ArticleNet Neutrality Protest June 12th, 2017Next ArticleInspiring Presentation At WWDC 2017 – Convenience For You Is Independence For Me