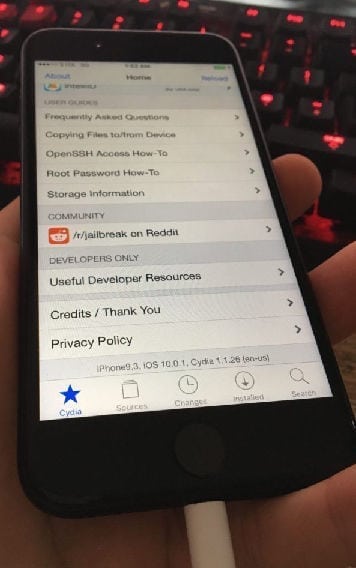 Apple’s new OS for its mobile devices was just released a few days ago. However an Italian hacker, Luca Todesco claims to have successfully developed an iPhone 7 jailbreak. Taking to Twitter to show off the result, Todesco wrote ‘obligatory Cydia screenshot’ and it promptly took everyone by surprise. It is pretty surprising for a jailbreak to be confirmed this early after the release of an OS.

Moreover PANGU, a Chinese hacking group infamous for a variety of jailbreaks uploaded the tools to jailbreak iOS 10. It is to be noted that PANGU claims that the jailbreak is untethered (not semi-tethered). It means you don’t want to re-jailbreak again and again. It’s a hassle-free jailbreak. Pangu iOS 10 jailbreak process is somewhat different from previous jailbreak methods. The user must create a custom IPSW file as the Snowbreeze Jailbreak process (before iOS 6.1.6).

-Very easy. But It only hacks the Safari browser to download 3rd party IPA files to your device. You cannot install system tweaks and system apps at all using Semi Jailbreak Cydia.

-You can get iOS 10 root access from Untethered Jailbreak. You can download the fully functional Cydia, But, Still many apps are not compatible with iOS 10.

Apple isn’t far behind when it comes to securing the integrity of it’s devices. According to PANGU:

At this moment we are still unsure as to if Apple was successful with it’s hotfix.