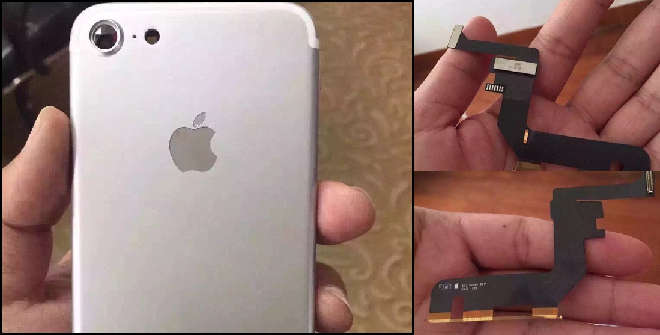 Following the rumors for the anticipated iPhone 7, leaked iPhone 7 images of the rear case has unveiled some design rumors to possibly be true.

First off, the iPhone 7 images show the extruded camera lens aperture, along with the increased diameter. Earlier schematics suggested these aperture features, and they could very well hint to additional sensors being integrated into the iPhone. The aperture bump drops any hopes for the camera bump to discontinue, as it may now last for another year. What’s more to the aperture is that it is closer to the casing edge. This marks a difference between current models and the iPhone 7. The dual cameras are still rumored to be unique to iPhone 7 Plus, but this model’s camera seems to permit more functionality for better results.

The antenna lines were seen as removed or varied in earlier blueprints. Here they seem to have been redesigned. The typical contrasting “strips” on the top and bottom of the back have now been made sleek, confining the lines to the edges of the iPhone. This would mark the second variation in the physical design. What was also added from the leak was the display of screen cables.

It is obvious that right now, probably nobody has a fully integrated and working model of the iPhone 7, which is shown from the leaks and rumors. The major focus seems to be in the internal hardware for Apple, for a better performance, with few modifications to the feel and appearance of the iPhone 7. There is the audio jack exclusion, which brought up rumors of waterproofing. The fact that  iPhone 7 will be without the audio jack, and would be sporting Bluetooth headsets and other audio extensions proves that Apple might be considering the introduction of a waterproof iPhone.

Moreover, the upcoming iPhones are said to be made with glass bodies. iPhone 7 will be carrying iOS 10 in it as it is expected to be made public later this year while the new Apple device software is being prepared for this June at their annual Developer’s Conference. All rumors will be officially debunked most likely in the fall of this year.