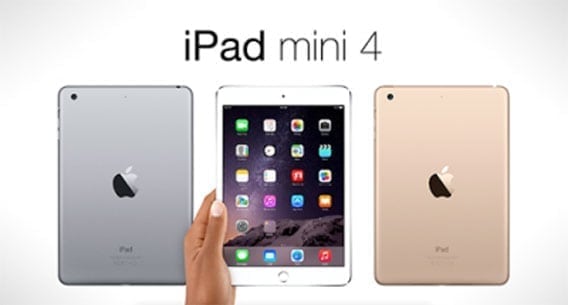 Macotakara is a Japanese blog, which is considered to be a source of accurate information about unreleased Apple products and general company news. The Asian blog claims to have credible information of the yet-to-be announced, upcoming iPad mini 4. The report claims that the physical appearance of iPad mini 4 will be a shrunken version of the previously released iPad Air 2.

The yet-to-be announced fourth-generation iPad mini is predicted to adopt some of the hallmark features of the iPad Air 2 hardware such as its sleek and slim design with 6.1mm thickness as compared to the currently used model which is 7.5mm thick. However, the device is supposed to retain the same 7.9-inch display like previous models, making it considerably smaller than the iPad Air 2. Secondly, the iSight camera at the back will be upgraded from five megapixels to eight megapixels. It is also expected to inherit other attractive features present in the second generation iPad Air, like Burst mode, which is used for taking multiple photos in rapid succession, and the Panorama mode, which enables the user to capture 180-degree panoramic images up to 43 megapixels. There is a high probability of a fully laminated display alongside anti-reflective coating for a supplemented viewing experience being I included in the new version.

Rumor has it, that the iPad mini 4 will have faster 802.11ac Wi-Fi networking and a speedy A8 processor which is currently in use in the iPhone 6 and iPhone 6 Plus. The source (Macotakara) is still somewhat ‘uncertain’ about the credibility of this rumor.

The device was refreshed recently in October. (In our opinion it can hardly be labeled as a refresh as Apple just introduced Touch ID and added a new gold color option to the iPhone 6)

Macotakara also indicated that the Cupertino-based company would be releasing a trio of new iPads later this year, which includes the iPad Air 3, iPad mini 4 and “iPad Pro”. Experts believe that if this happens then it could help Apple to spring back from five consecutive quarters of declining iPad sales. Although the Japanese blog has a respectable track record of reporting authentic news related to Apple but at the moment there is not enough substantial evidence to assure us of the fact that all three tablets will actually be unveiled this autumn.