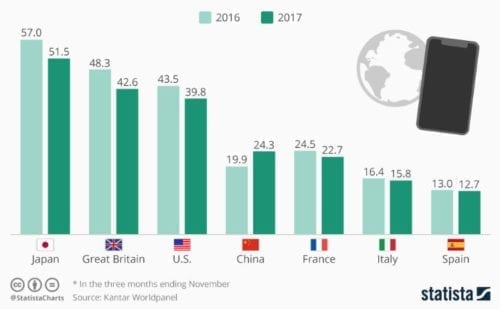 Android has historically maintained a significant hold on its large share of the smartphone market. The platform is supported by the vast majority of smartphone manufacturers and users worldwide. The most obvious driver of this trend is affordability. Android devices can be significantly less expensive than their competitor’s products.

Is Apple In Trouble?

In a report from Strategy Analytics, Apple’s iOS market share is slipping in a rather large market. Smartphone sales in India indicate that the Apple brand is taking a beating. This is largely tied to the affordability of Apple’s iOS devices. /so is Apple in trouble? Apple’s share in this market was already small at 4.5% a year ago and is now at almost half that to 2.4% in the second quarter.

Apple’s products are priced at a premium as if all their potential customers were living and working in Silicon Valley. This is where the median annual income is about $115,000 and a previously owned 20-30-year-old or older home will cost you about $800,000. A $1,000 iPhone is not a problem in that market. Compare the annual middle-class income in India which is between $13 – $14,000 an iPhone X may make it to one’s wish list, but that’s as far as it goes. Sure there are cheaper iPhones in some markets but how well do they compare to Android phones at a lower price point.

Google’s Android has aggressively grown its market share from 90% to over 97%. This pattern is repeating itself in other key countries as well where Apple’s iOS is losing ground. Some may be surprised to learn that this includes the U.S. and Great Britain. One exception to this trend is China where Apple saw a 4.4% increase this past year. Smaller gains were also seen in Brazil, Mexico, and Germany. Ironically the Chinese smartphone manufacturer Xiaomi is making inroads in India with their Mi series smartphone which has a lot to offer at a considerably lower price point than Apple’s offerings. In India and elsewhere it appears that it’s not a matter of which phone is better but rather which is more affordable.

This is not the only area where the numbers are falling for Apple.  Apple has traditionally had a strong foothold in Education. However, budget-friendly Chrome books are finding their way into more and more schools.

Apple needs something big and affordable with lots of WOW factor. Be it a service or a product. Something other than an annual iPhone update needs to present itself.