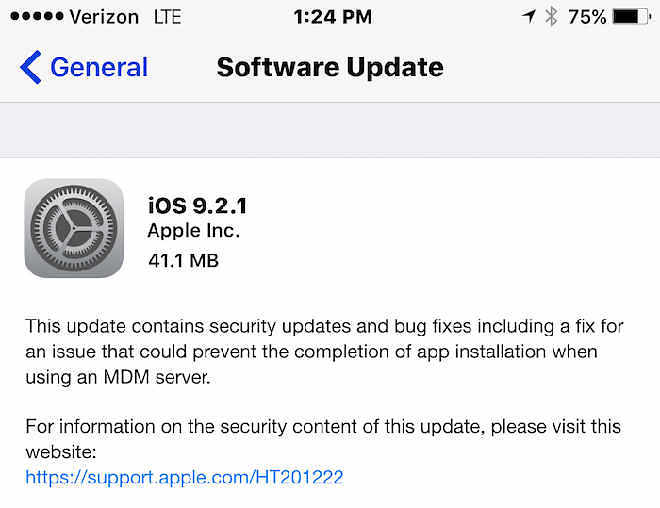 Apple just released a new update to its operating system for iPads, iPhones and the iPod which is iOS 9.2.1. The new version contains certain security updates and bug fixes as well.

Apple said in the update page for the software that “This update contains security updates and bug fixes including a fix for an issue that could prevent the completion of app installation when using an MDM server,”.  MDM refers to Mobile Device Management. This is used by certain companies which assign devices to their employees. The beta version of iOS 9.2.1 began seeding to developers on 16 December 2015. The third beta was released in the start of January and the next version, ie iOS 9.3, has already begun testing.

This new update will include Quick Actions as well as the new Night Shift option. The new update will also offer password protection for the Notes application and other new Education features. We are especially looking forward to the launch of this update’s Night Shift mode!

This Operating system’s update will also allow Apple Watch users to connect multiple units to one iPhone. Doing so will make it easier to swap out different styles according to the occasion.

Additionally, we recently reported that iOS 9.2 version was causing issues with the battery indicator in the iPhone 6s and iPhone 6s Plus. Apple also disclosed a temporary fix for the issue a few days ago.

If you want to download and install the update on your iOS device then you can do so in two ways. You can either go to the settings application and select the update option on your iOS device or you can alternatively plug in your device to your computer and try to update it via the iTunes application. The size of the new update is different for all devices and for the type of network being used. However, the update is estimated to be above 40 megabytes.