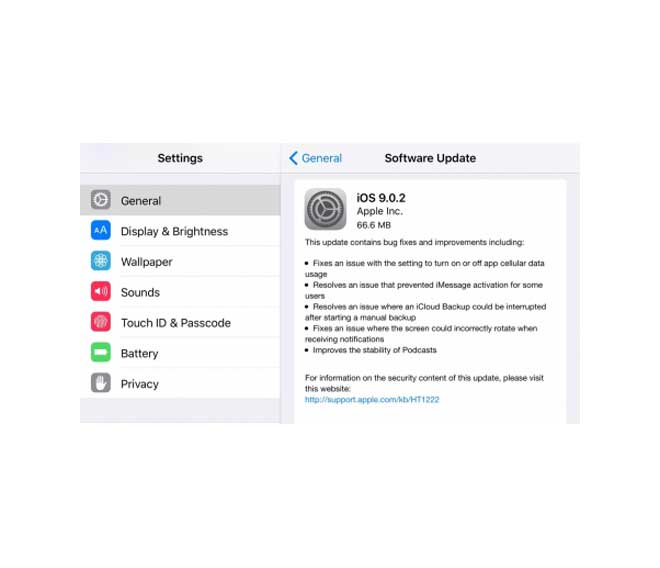 A second minor update to the iOS 9 in the form of iOS 9.0.2 has been released. This update, which tweaks minor performance issues and introduces several bug fixes, comes a full month after the initial release of the new operating system and a week after its predecessor the iOS 9.0.1.

iOS 9.0.2 has been made available to all iOS 9 users for download.

The update doesn’t bring any massive overhauls instead, it mainly focuses on patching bugs that were prevalently annoying in the original version of iOS 9. In addition iOS 9.0.2 aims to bring the overall user performance up by a considerable level. Some of the main things focused on in this update are Stability in podcasts, buggy screen rotation and some issues with manual/auto backup.

Below is the full list of changes in the update:

The 9.0.2 update comes after last week’s 9.0.1 which, among other things, fixed problems with auto-updating, failing alarms and Safari videos getting distorted. Apple’s self-quoted theme ever since iOS 9 has been pro-activity, focusing on solutions before the problems are ever faced. This, however, is contradicted by the long list of bugs that the live software has been experiencing ever since its release. With users complaining about iOS 9 not working optimally on older devices and feeling ‘clunky’ one can only hope that problems that are yet to be addressed by apple are looked at soon.

The first major update to the iOS 9, the iOS 9.1, will be released sometime in the near future. iOS 9.1 will include new emoji and will give you more control over the ‘Messages’ department. Furthermore, it will target compatibility with Apple’s new devices; such as the Apple TV and the iPad pro.