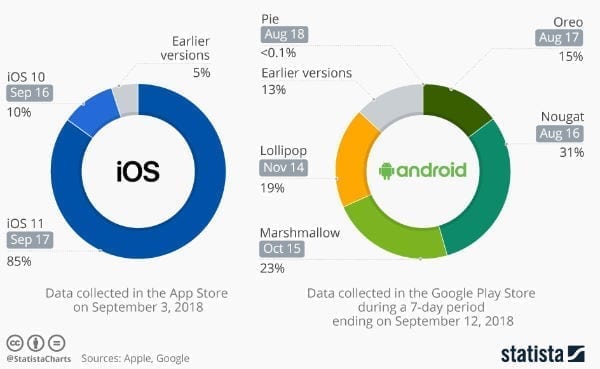 iOS 12 was released earlier today and it has not disappointed this user.  We already had a preview of what was to come in iOS 12 at Apple’s Developer’s conference months ago.  It is impressive and one of the more ambitious iOS upgrades.

What I find interesting is the adoption rate of iOS compared to Android.  Our friends at Statista provided the infographic below that really illustrates how fractured the Android OS is in comparison when it comes to users upgrading to the latest version.

Now I’m not saying that one OS is better than the other. Lord knows I don’t want to get into that brawl. But it is an interesting comparison. The graphic speaks to the advantage of a developer having complete control over both the hardware and software development…I’m just saying. Both OS’ have their advantages, especially when the latest version is running on the latest hardware.

Millions of Apple users like myself will rush to update their devices in a matter of hours. This is one major point that sets iOS apart from Android.

Not Always A Smooth Ride

Apple does receive a fair amount of backlash after a new version of their OS is released. This is usually because of users complaining about slow servers, bugs or bricked devices. What this shows is that millions of users are actually updating their devices. This is one major difference between Apple’s mobile ecosystem and Android.

Typically iOS devices will handle the latest iOS upgrade for a number of years. Many manufacturers of Android devices are slow to roll out updates to their users so they are often stuck with the same version that came pre-installed on their device.

By comparison, 95% of iOS devices are currently running on some version of iOS 11, which was released in September 2017 or iOS 10 from the previous year. Since these are expensive devices, I would think Apple users should expect nothing less.

By comparison, less than 15% of Android users are running last year’s version of Oreo. More than half of all Android devices are running on a system released in October 2015 or earlier.

This would seem to make development on the Android platform more challenging having to work with a deeply fragmented system.

An iPhone 5s, released in 2013 is able to run on the latest version, iOS 12 released today. Today, that’s a 5-year-old device that is ancient in tech years. By the time the next iOS upgrade occurs, the 5s will be six years old. I’m impressed and thank Apple for not leaving those with older devices behind.