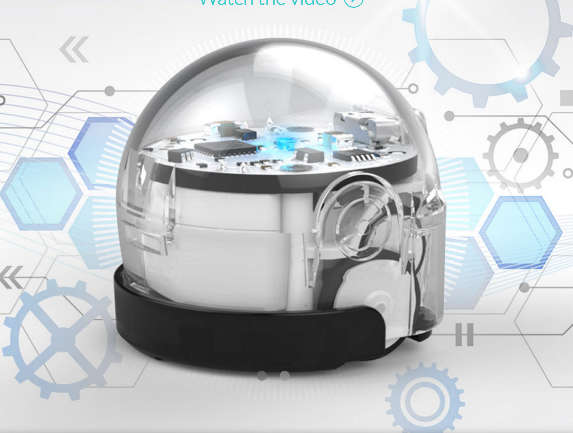 is an engineered robot that is USB charged and is capable of following lines to move on a path. It allows kids to learn basic code compilation and deductive reasoning. To control its orientation and speed, it has been programmed to detect the color of the path it is following, for example red, black, green and blue.

Ozobot has been designed elaborately enough that it is able to move over all kinds of surfaces, may it be paper or atop tablets. The main idea behind the production of this device was to assist children in developing reasoning and deductive skills and acquaint them with simple programming. The construction of Ozobot is intricately elaborate and well designed. It’s electronic parts are assembled beneath a thick transparent plastic shell to form the hard body and are clearly visible. The base is quite well supported while the power buttons and charging ports are recessed.

In addition to the expertly assembled interior, the device has the added feature of a plastic covering that resembles skin in color and texture and serves as added protection from shock damage. This feature has rendered the Ozobot a perfect companion for kids, as they love to think of it as a friend. The remarkable popularity that Oxobot has gained over the recent past is owed to the fact that it grabs kids attention and diverts them from screen time- PCs, gaming gear and other entertainment devices.

The Ozobot can move over any piece of paper with a pattern drawn on it, which is an offline version of digital learning. Brain teasers and related challenges are a speciality of Ozobot as it can affectively solve both. The website contains some printable designs which are fundamentally mazes that have missing pieces that are represented by white squares. The teasers have option codes given beneath them so that the user can choses from them. The right code completes the path and the Ozobot then can move from start to finish successfully.

Oxobot’ success in the market as a practical toy has been so great that two Ozobot apps have been launched both for Android and iOS. they include Ozobot and OzoGroove. The apps work best on tablets owing to the screen size as it matches the size of sample mazes. The apps are compatible with Nexus 10 too.

In a nutshell, the Ozobot is a relatively simple but efficient toy, perfect to be used for educational purposes. It is strong enough and built to be used by kids for the long term. The charging time is short and the battery serves over 6 hours of constant use. The apps get installed only on devices that support them. In addition to there being numerous codes and Ozobots function on ordinary mediums such as paper, there shall be no end to the fun and playful creativity kids will conjure up when coming up with mazes and pattern designs and actions for the Ozobots to follow and perform. As with any electronic device, it is important that the wheel areas are cleaned regularly to keep it moving smoothly. Given that the Ozobot is used properly on a solid surface or tablet and stored in the included storage containers, there should be no issues keeping the device free of dust and functioning properly.

In addition to downloading apps that turn your tablet into a playing surface, you can also print games from the company website, play web games from your tablet, and learn OzoBlocky, the web-based programming editor for OzoBot.  The company even provides a STEM (Science, Technology, Engineering, and Math) program for the classroom with downloadable lessons from their lesson library to introduce young minds to coding.