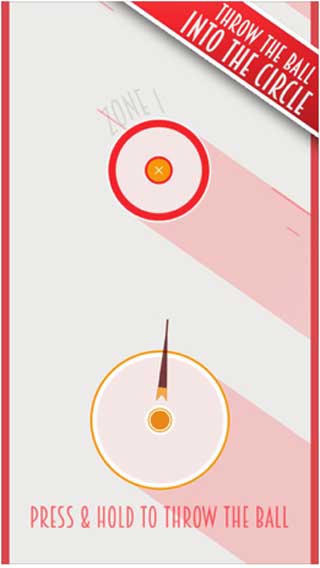 Into the Circle is a fascinating game by Gameblyr.  This indie game is an amazing way to pass the time while waiting in line or for the bus or at the Doctor’s office. Similar to Frogger and Orbits, Into the Circle combines a mixture of different sized circles and a ball that you try to launch into the circles with a way to train your brain to accurately judge distance and the necessary force needed to end up in a circle. This is an attractive and addicting game with a soothing soundtrack.

The point of Into the Circle is to launch a ball into the center of the circle and then again into the next available circle and so on until you miss. A swinging pendulum like arrow will appear out of the circle you’ve occupied, moving back and forth at about 45 degrees pointing towards the next circle.  This basically aids you with lining up your next shot.  The game is touch sensitive so the longer you touch the circle, the more power you accumulate for your shot.  Hold it too long and you’ll overshoot the target.  Not long enough and you’ll fall short.

After you touch the circle, there will be a yellow fill inside the arrow indicating the amount of force. 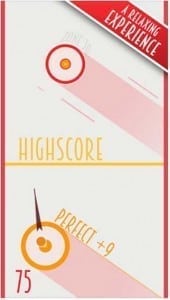 One of the challenges is getting just the right amount of force for you to make it exactly inside the next circle. Anywhere inside the circle or even on it’s boarder is safe.  If you make it to the center of the circle, marked by an X you will see the word “Perfect” and gain extra points. For example, if I had already made it in the center only once, then the next time I get the perfect center I will get 2 additional points and so on. When you make it inside the circle, the circumference will turn yellow, a way to show you that the main character made it at least halfway into the wanted area.

I like this game because it is challenging, fun, and a little addicting. I remember wanting to strangle my iPhone when I lost. It seems hard at first but you get the hang of it after a day or two. Can’t wait to play more games by Gameblyr!

Extra stars can be purchased which are used for do-overs and there is a premium version of this game that can be unlocked with an in-app purchase.

Fun, addicting, challenging and soothing all at the same time. Download in the App Store.