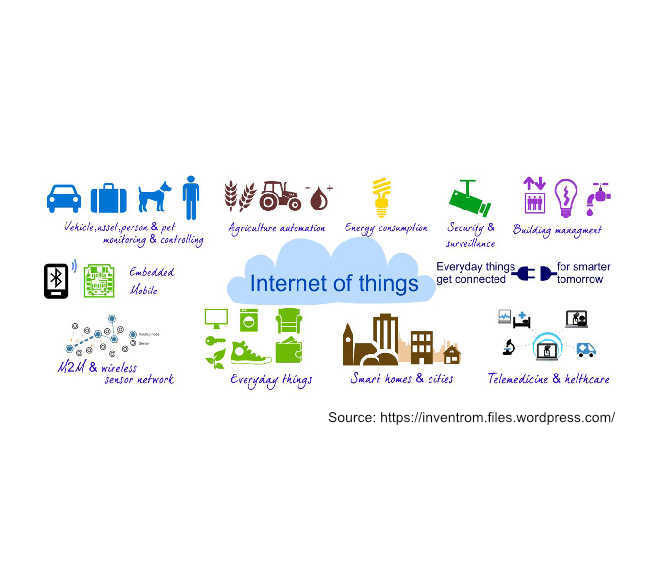 The Internet of Things (IoT) is a system of interrelated computing devices, mechanical and digital machines, objects, animals or people that are provided with unique identifiers and the ability to transfer data over a network without requiring human-to-human or human-to-computer interaction.

Now that we have established that fact, let me explain to you what exactly the IoT is as to eliminate any misconceptions. It is usually thought that it involves one machine transmitting data to another machine but that is not always the case. Most of the data is measured by sensors. Now these sensors do not have to be connected to different machines. All they require is the ability to transmit. An example, which is strictly theoretical, will explain the implications of IoT much better.

When we rebuild bridges, we can use smart cement: cement equipped with sensors to monitor stresses and cracks. This is cement that alerts us to fix problems before they cause a catastrophe. And these technologies aren’t limited to the bridge’s structure. If there’s ice on the bridge, the same sensors in the concrete will detect it and communicate the information via the wireless internet to your car. Once your car knows there’s a hazard ahead, it will instruct the driver to slow down, and if the driver doesn’t, then the car will slow down for him. This is just one of the ways that sensor-to-machine and machine-to-machine communication can take place. Sensors on the bridge connect to machines in the car: we turn information into action.

We know what the Internet of Things is capable of now, so let us look at a few related fun facts. The term was first used by Kevin Ashton, one of the co founders of MIT’s Auto ID Center back in 1999. It may be hard to believe but only 0.06% of the devices capable of connecting to the internet were actually connected by the year 2014. Only 10% of the cars were connected to the internet in 2012 but It is estimated that 90% of the cars will have internet connections by 2020.

You can learn more about the thoughts of C-Suite decision makers by watching this Video.

Internet of ThingsIoT
Previous ArticleNew Apple Watch 2 Where Are You?Next ArticleReports of Cellebrite Hacking iPhone May Be Red Herrings