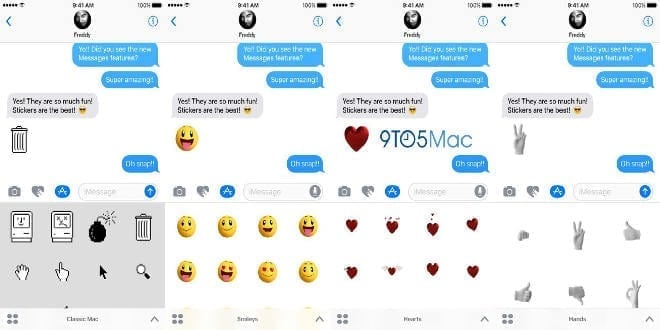 Apple truly took the opportunity for a potentially lucrative route by catering to iOS developers and designers. This became apparent following the introduction of iOS 10 during the WWDC 2016 keynote event.

The keynote event saw significant attention being given to the new Messages app in iOS 10. Especially with Apple announcing that developers would be able to design and create unique sticker packs and other add-ons for use with iMessages. Apple has taken a step further into the ambitious venture in order to promote the developer market. Apple has already released four new animated sticker packs for iMessage users that are using the iOS 10 beta.

The four sticker packs are just the first step in what is expected to be a series of apps to support the new Messages app. Apple Watch owners will find some of the icons and stickers within the pack quite familiar.

The first beta of iOS already shipped with the Classic Mac sticker pack originally designed by Susan Kare back in the 1980s. This pack can now be deleted and reinstalled whenever desired. Also following are the new releases of sticker packs which focus on Smileys, Hearts, and Cards.

Needless to say, even Apple would have to agree that the new sticker packs aren’t exactly state of the art innovations in terms of design. Furthermore, it is apparent that they haven’t been tailor made for the iMessage experience. The animated stickers in the Smileys, Hearts, and Hands packs have actually been ported over from Apple’s watchOS platform where they served the same function. The Classic Mac stickers were created for the original Macintosh years ago before being shipped with iOS 10.

To access the stickers, they must be installed from the App Store. After which they can be accessed through the new iMessages app in the bottom left corner of a conversation or just near the text entry field. The animated sticker can be sent as a part of the conversation with just a single tap.

Even though it is only a beta, iOS 10 is already showing promise and its only good news from here as developers explore the potential of the new Messages API that allows for the creation of apps within the native Messages app itself. As it stands, Apple’s ambition might be well worth it in the long run.