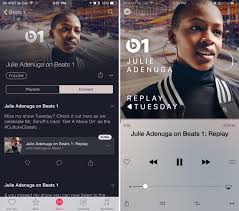 Beats 1 radio was announced almost two months ago. After the introduction of Beats1 radio, Apple has continuously been trying to improve the application and  recently a new feature was added to Beats1 radio to make your radio listening experience even more enjoyable. The California-based tech company added a ‘replay’ feature to radio shows.

This Replay feature focuses on a number of shows including those of Zan Lowe, Julie Adenuga and Ebro Darden amongst others.

Previously, listeners could listen to the playlists that RJs or DJs used on selected shows after a show on Beats 1 radio ended through the ‘Connect’ feature. Or they could listen to the repeat broadcast of the show that aired 12 hours after the original show. Other than that they had no options.

Now, thankfully, Beats1 radio listeners will be able to listen to the whole thing even 12 hours after the show has ended!

In order to answer ‘How to use Beats1 radio replay?’, we’ve come up with a number of easy steps you need to follow.

However listening to shows through the Replay method will not allow you to access information about songs that are going to be played at that moment. You can do so while listening to live shows by seeing the song’s title in the Control Center. So you will instead have to get your hands on the show’s playlist and guessing the song’s title. You will also not be able to like or ‘love’ songs when you are listening to them via Replay.

So Beats1 Replay will actually work very similarly to a podcast. (Of course it won’t have any Chapter marks like podcasts do.) In our opinion, such a feature is a very welcomed change since live radio shows are not only about the music being played but also about the interviews and the commentary of the DJ/RJ.