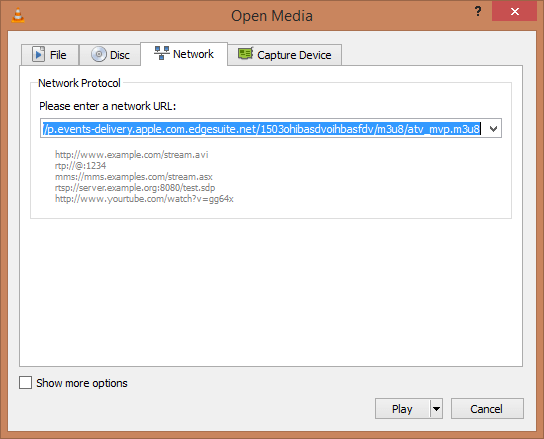 The Apple Watch event is less than three hours away, as of typing this blog post. Besides giving all the pertinent details about the Apple Watch – including new features, specifications, battery life claims, release date, and price – Tim Cook and his boys are also expected to announce a 12″ MacBook Air with Retina Display. Apple does provide an official live-stream for Safari on iOS, OS X, as well as Apple TV, but there is always a way to stream Apple Watch event on Windows using VLC media player.

Let’s jump right into it! Follow these steps to stream Apple Watch event on Windows.

If you do not already use it, consider doing so! VLC Media Player is arguably the most popular media player among power users because it plays any media file you throw at it, and it is quite efficient at it.

Step 2: Launch VLC Media Player. Click on the Windows button, and type ‘VLC’. It should come up in the search results if you installed it correctly.

Step 4: Paste the following address into the network URL:

That’s it! The stream does not work as of typing since it obviously isn’t live. However, it will definitely work when the live-stream begins at 10 AM local time in San Francisco, California.

Some time ago, I thought this was because Apple is stress-testing its massive cloud infrastructure, and so does not want to over-burden it too much to affect other cloud services, but now, this logic is hard to believe. The only plausible reason from my perspective is that Apple is a closed, exclusive company by nature. Are you a big fan of Apple? Well then get an Apple device if you want to stream the latest event!

For people with an iOS device or an OS X notebook/desktop, just go to apple.com/live to stream the event.

apple watchVLCWindows
Previous ArticleFortune: 4Chan Client For iPhone & iPadNext ArticleHow To Try Out Firefox For iOS On Your Jailbroken iPhone