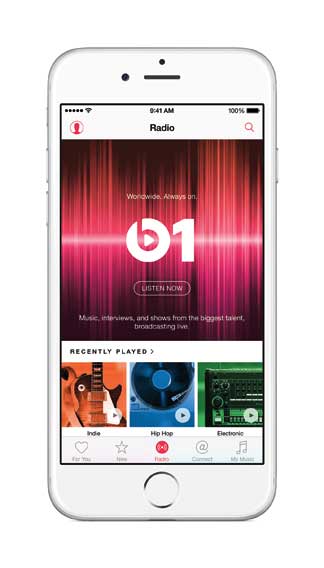 How to record Beats 1 radio

Beats 1 radio station was announced earlier this year on WWDC 2015 and released last week. In the short time after being released the app has been very popular among Apple users. However it does have one serious drawback; it operates as a traditional radio station. This means that if there’s a particular show that you are hankering to listen in on, you have no other option but to tune in at the time of it’s broadcast and your show will not be available for re-listening later.

In this article I will explain one way How to record live shows from Beats 1 radio station.

This method requires you to be in possession of two Apple products because it uses OS X’s QuickTime player app.

Step 1: Turn Auto log off on your iOS 8.4 device by going to Settings, clicking General, then selecting Auto Lock and select Never. Now open the Music app on your iPhone, iPad or iPod and select Listen Now in the Beats 1 radio station.

Step 2: After the radio station has started playing connect your iOS 8.4 device to your Mac.

Step 3: Open QuickTime player app we mentioned before and then after selecting the File menu, click on New Audio Recording. You will notice a downward facing arrow next to the record button. Click on this arrow and from the drop-down menu, select your iPhone and select the Quality as High. Ensure that the gray bars are turning white. This signifies that the radio station is being heard by your QuickTime app.

Step 4: Select the record button to record and select it again to stop once you’re finished.Now the clip will turn into a playable clip.

Step 5: Save this clip by selecting File again and then selecting Save.

This method is free but it is a bit time consuming and requires you to remember the  dates and times of the shows you want to record. You’ll have to do all the recording manually and if you’re a busy bee (or just a very lazy person like myself) then this method is really not for you!

Another way to record a favorite broadcast is by purchasing an audio recording software for your Mac. You can either buy Audio Hijack 3 (for $50) or Streaming Audio Recorder (for $40).

To schedule recordings just enter the start and end times of the duration for which you want to record. Then, as previously, select System sound as the Audio Source. Now as long as your Mac remains switched on, broadcasts on Beats 1 radio station will be recorded. This is an easier method than the previous one even though it is a little expensive.