Ryan Petrich is among the A-list of jailbreak apps and tweaks designers and developers. He has his name behind at least two dozen popular, trend-setting jailbreak tweaks and apps which we’ll briefly discuss later. The main point of this article is to show you how to add Ryan Petrich repo in Cydia so you can check out his tweaks! The instructions in this post also apply to adding other repos, too!

Alright, so yes, we were discussing Ryan Petrich’s work. His single greatest, most popular creation is Activator. There are many ways of describing Activator, but the simplest way to describe it is that you can connect button presses, gestures, tapping a certain area of the screen, change of charging / battery state, change of network connection, with a number of built-in actions. Activator allows developers to connect their tweaks with Activator, so if you download certain tweaks or apps, you can execute their core action if the developer integrated it with Activator.

Now, back to the topic of our blog post: how to add Ryan Petrich repo to Cydia. It goes without saying, but you must be jailbroken. The latest version of iOS – iOS 8.2 – cannot be jailbroken but if you are on any version of iOS between 8.0 and 8.1.2, you can jailbreak using TaiG on Windows, or PP on OS X.

Step 2: Tap on the Manage tab at the bottom.

Step 3: On opening the Manage tab, you will see Packages, Sources, and Storage. Tap on Sources.

Step 4: Tap on the ‘Edit’ button in the top-right corner. 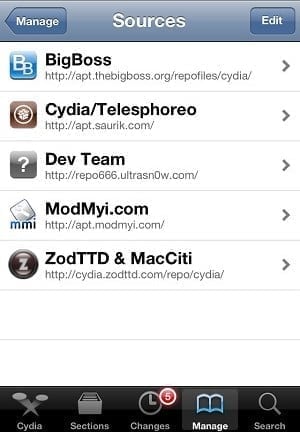 Step 5: Now tap on the ‘Add’ button in the top-left corner.

Step 6: Cydia will ask you to enter the URL of the repo you want to add. Copy and paste the following text:

Note that you can replace this link with any other repo’s link to add that repo to Cydia! 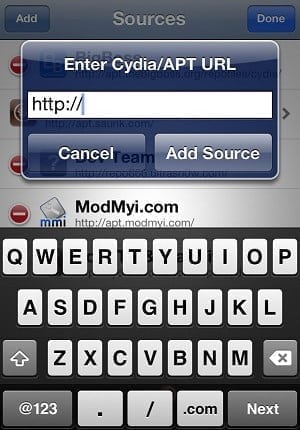 Step 7: Cydia will now download the list of apps and tweak names that are available on the repo, so you can download the apps / tweaks themselves.

Step 8: Once Cydia has updated sources, you can go to Search and search for any of Ryan Petrich’s great jailbreak apps and tweaks.