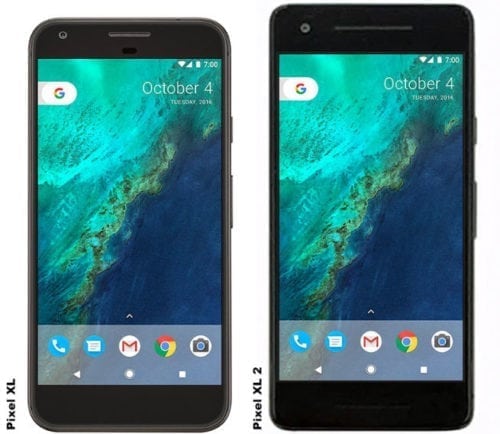 A number of complaints have indicated that Pixel 2 makes a clicking noise. Google has acknowledged that complaint and say that it will be fixed with a software patch. Pixel 2 has just that one major complaint. The display is not problematic. Alas, the same cannot be said about Pixel 2 XL.

Pixel 2 XL has been getting complaints about the display ever since it was dispatched to a few users. Some have criticized Google’s color set up for the Pixel 2 smartphones, which intentionally have a less saturated, more accurate look compared with rival Android devices. Also a cooling of the color temperature of the display towards blue when viewed at an angle.

“Based on the recent feedback, we’re adding a new mode for more saturated colors, which will be made available via a software update to both Pixel 2 phones in the next few weeks.”

These issues may very well be solved by a software patch. But the more damaging news is the image retention or image burn in the navigation bar at the bottom of the screen.

Queiroz said: “Our current investigation of burn-in, which started as soon as we received the first user report on 22 October, confirms that the differential aging is in line with that of other premium smartphones and should not affect the normal, day-to-day user experience of the Pixel 2 XL. Regardless, we use software to safeguard the user experience and maximize the life of the OLED display, and we’ll make ongoing software updates to optimize further.”

As if these problems were not enough, complaints are now rising that the audio recording quality of the Pixel 2 XL is below par and distorted. A few people complained that while recording 4K video, a slight movement of the camera resulted in high pitch shrieking noises when listening to the playback.

As a result of all these complaints, Google could not have just stayed silent and they went and added an extra year of warranty for the Pixel 2 phones making the warranty 2 years.