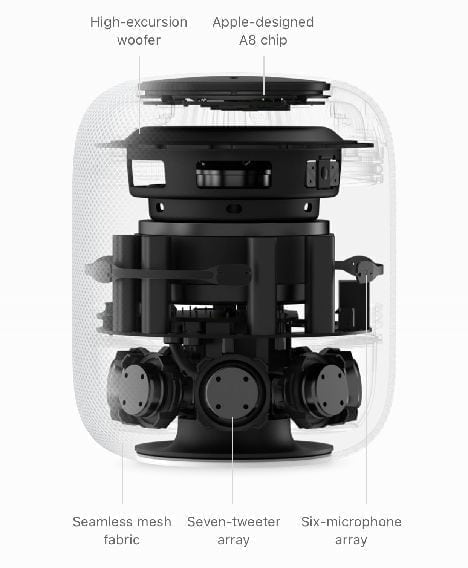 Leading up to WWDC there was a lot of buzz about a new product Apple was going to announce at WWDC 2017. As suspected a new smart speaker was introduced near the end of the keynote. Apple’s new speaker was finally unveiled. I am glad I finally know what to call this thing. No longer do I have to refer to this as Apple Speaker or Siri Speaker or Apple’s Smart Speaker.  The official name for this new Apple product is Home Pod. Tim Cook reminded us of the great portable experience we have with music with the iPhone and AirPods. Which was a great segue into the music experience in the Home.

Phil Schiller had the honors to introduce the new Apple Home Pod to the audience.  He took us under the hood and gave us a tour of the Home Pod’s inner workings. Before WWDC there was speculation that this new product would include a screen, especially after Phil Schiller’s comments a few weeks back about how such a device is missing something without a screen.

With that behind us, Phil went on to show us what makes Home Pod special and how Apple reinvented Home music. Starting from the position that some competing products focus on delivering high-quality sound and others focus on delivering the smart assistant through machine learning.  Apple says the Home Pod combines these elements into a single superior product.

Phil mentioned that Apple has been working on this for much longer than anyone outside of Apple expected.  Distortion free music at low or really loud volume was the first goal of this project.

“It needs to Rock The House”

Spatial awareness was the next goal where the device adjusts to the environment it’s in.

“Fun to use” was next on the priority list. There is a Musicologist built-in to the Home Pod that helps you discover music based on your tastes. Home Pod is highly integrated with Apple Music.

From that point, Phil provided the sneak peek into Home Pod which will be available later this year. At 7 inches tall, an array of seven tweeters with individual drivers, an upward facing 4-inch woofer with a large motor that moves a lot of air, and an A8 chip are inside. The same chip that’s inside the iPhone. This big-brained speaker does acoustic modeling and audio beamforming with directional control.

There are six microphones around the top so when you speak to SIRI she listens and will answer questions like “who’s playing drums on that track”. Home Pod is also a home assistant that will give you news, weather, sports, podcasts and it supports texting and more.  It will control your SmartHome and serve as a smart home base. Give it commands like turn on the air conditioner or turn on the lights in the living room.  With preset Scenes you can simply say “good night” or “good morning” and all the commands associated with that scene will be executed.

Privacy is important and Apple has a tradition of having your back so nothing is sent until you say “Hey SIRI”, then the commands are encrypted before sending.

Priced a $349 the Home Pod will begin shipping in December.