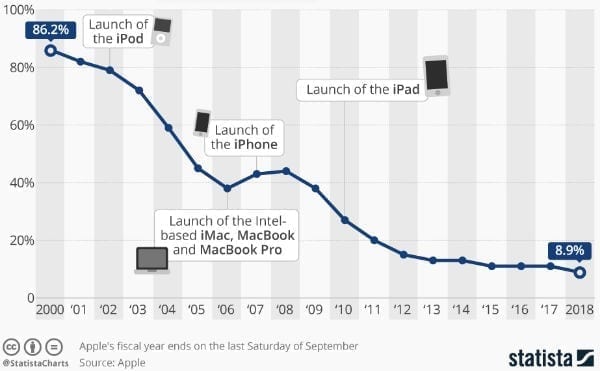 The Highs and Lows

Apple is having an awesome year on several fronts except for one important product line.  First the good news.

The company’s last quarter, which ended on June 30th was a little short on iPhone sales. This is likely due to Huawei barely surpassing iPhone in the global smartphone marketplace. In spite of that news, Apple’s iPhone is approaching its biggest year ever. In fact, the company is rapidly approaching its expected high water mark of 1 Trillion dollar valuation. Some have reported it has already reached this milestone.

By the end of the third quarter on June 30th, iPhone revenue reached $129.5 billion. Over the previous 9 months, the record was $122.8 billion. The company has seen a significant increase in iPhone revenue. If this trend continues through the fourth fiscal quarter ending on September 29th, Apple should see a record year.

When you consider that the smartphone market is fairly saturated and not growing as it has in previous years, this is a significant accomplishment for Apple. Of course, having an iPhone that costs $1000 in your lineup was sure to contribute to these record-breaking numbers. Apparently, a $1000 iPhone was a good decision for the bottom line but is it sustainable in a flat market? We’ll have to see where this goes three or four quarters from now.

On the downside, I’m sad to say that Mac sales have plummeted. This is the product that made Apple. Only 3.7 million Macs sold in the last quarter. This is the lowest Mac sales have been in years. Tablets have taken a chunk out of computer sales in general. Also, the Mac is more expensive than most other computers. In general, these are quality machines and historically most agree they are worth the price. However, embarrassing problems with the new MacBook Pro keyboard haven’t helped even though the company is correcting the problem.

Where Do We Go From Here?

It’s hard to imagine Apple without Mac. Even at 3.7 million units, the Mac is still a multi-billion dollar product. None the less a product that was over 86% of the company’s total revenue in 2000, has seen a steady decline since then and now only accounts for 8.9%. I can’t imagine the world without Mac so I hope Apple can turn this around. Addressing updates to the line and listening to customer concerns about current models would be a good start.

The company has a history of being very secretive about its development. This makes perfect sense in the tech industry since as soon as a new product comes out so does a competing product. Not necessarily better, but usually cheaper. I have no idea what if anything the company has in the wings but I can’t help but feel Apple needs a new line.

Since the global smartphone market is saturated and somewhat flat I assume Apple is looking into the “next big thing”. Years back when Apple changed its name from Apple Computer to Apple, Inc. they also reidentified themselves as a “consumer electronics” company. With that in mind, I would like to see a suite of IoT products from Apple. After all, IoT is a large growing market.

The number of third-party hardware developers using HomeKit seems to be limited. Apple has already done a great job with the software so it makes sense to follow up with hardware as they did with the Mac and again with iOS on iPhone and iPad. The company’s that have developed smart home products with HomeKit have done a good job but there doesn’t seem to be enough or any support from big players like Ring (Amazon) or Nest (Google). I would continue to encourage third-party development, but unless more developers come on board and a much wider range of products using HomeKit becomes available I fear HomeKit could be at risk. I feel strongly that Apple needs its own line of Smart Home products.

I also think the company needs to significantly improve SIRI.  I personally receive unexpected responses from SIRI on my iPhone too often.  I would also like to see SIRI act more like a true digital assistant on Apple TV and use the Web to respond to inquiries. Its limited role as an entertainment assistant on Apple TV is disappointing. There is so much potential for an assistant in a TV environment.  There are TV manufacturers that include Google or Amazon digital assistants built-in.  Where is the Cupertino giant on this front?

I personally would like to see some focus on new products and upgrading existing products other than the iPhone. I am just one voice that Apple is not likely listening to but none the less this is my humble opinion.