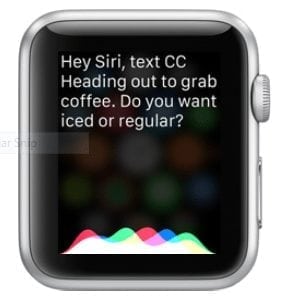 The Apple Watch, announced last September, has been set to be revealed on the 9th of March in a special Apple Watch event (there will be a livestream too!). A high-tech watch that does more than just tell the time, this is one product that is highly anticipated by Apple fans. The Apple Watch seems to have quite a few tricks up its sleeve, including a “Hey Siri” hot-word that engages voice control on your Watch and connected iOS device.

Siri, the personal assistant for iOS, took over the conventional voice-driven interface ever since the release of the iPhone 4S. With a Siri-enabled iDevice, you get the option to enable the “Hey Siri” hotword which will put your phone into listening mode, and instantly bringing up the assistant when it hears the words “Hey Siri”.

Long pressing the home button also brings up Siri. This feature is similar to “OK Google” on Android and “Hey Cortana” on Microsoft Windows Phone 8.1 and Windows 10. With an iPhone, however, the hotword is only available when the phone is connected to a charger, so as not to drain too much battery off-charge.

The “Hey Siri” feature will be available on the Apple Watch as well, and unlike other Siri-enabled iDevices, it will work off the charge as well (otherwise, what’s the point of this feature on the watch, huh?). This has raised concern as to how well the battery will perform with the Watch always in listening mode. But this is nothing unheard of. Most Android Wear smartwatches incorporate the ‘OK Google’ feature, which is just as battery-draining.

Now of course, this feature has been made possible by the presence of an on-board microphone. You can always hold down the digital crown on the Watch to activate Siri, but voice activation makes it so much easier. You raise your wrist, and say “Hey Siri” into the Apple Watch. The presence of a microphone suggests that the Watch can be used for much more.

You can use the microphone and the in-built speaker on the Watch to attend calls. Now keep in mind that this isn’t a GSM watch, so the calls you make have to go through a connected iPhone.

Frankly speaking, I don’t much see the utility of having call functionality on a smartwatch. Speaking to your wrist is weird enough – pressing it close to your ear to listen to it makes you look like a total tool. But hey! That’s just me set in my old ways – I still find using earphones for attending calls odd. If you’re OK with it, far be it from me to deter you. It’s just a matter of personal preference.

Anyway, what do you think about this feature? Do you think it is useful, or is it just easier to whip out your iPhone and deal with it on your own terms? Let us know what you think in the comments section below!