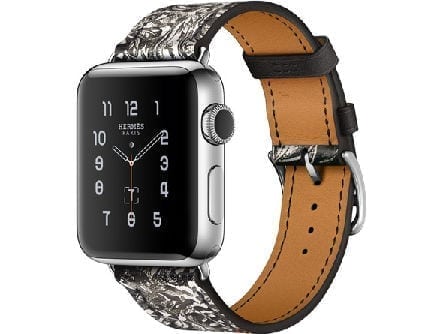 The Apple Watch is one of the most elegant, intelligent, and loved pieces of technology to ever be created. The Apple Watch has become a sort of modern marvel for industrial designers and an inspiration to many technology companies. Thanks to the design team at Apple, led by none other than the one and only, Jony Ive  Senior Vice President of Design.

Apple has recently partnered with other companies in an attempt to make the Apple Watch a more personal, unique, and customizable device that fits the user the way that he/she wants it to. The most recent of these partnerships is with Nike in which Apple actually created a new line of smartwatches, the Apple Watch Nike+. Another notable partnership is with the popular jewelry company, Hermès. The company made several bands for the Apple Watch and have now released a new one. The Equateur tatouage, an elegantly crafted Apple Watchband

Another notable partnership is with the popular jewelry company, Hermès. The company made several bands for the Apple Watch and have now released a new one, the Equateur tatouage.

This new band is mostly a black and white forest with a dash of color painted into what seems to be a lurking leopard. The band is a new addition to the recent resurgence of 80’s-like fashion. Especially considering the fact that the design of the band is printed on calfskin. It is said that the design of this new watchband is in tribute to the late Hermès illustrator, Robert Dallet. The inspiration for the design comes from one of Robert’s scarf prints. It was posted on Hermès’ Instagram account in remembrance of Robert Dallet.

The Equateur tatouage band is the newest addition to the Hermès’ Single Tour line of bands for the Apple Watch. It is also the first Apple Watch band to be sold with a unique design and not just a solid color. The band is now available for a price of $410 USD for the 38mm size and $340 USD for the 42mm size. The band is available only on the Hermès website and at Hermès stores.