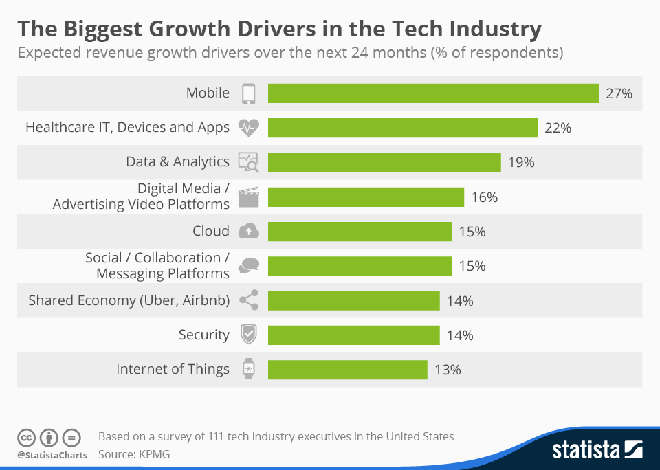 Today, just about everyone owns a mobile device.  This rise in mobile devices accounts for the changes we see in media consumption. This trend has been the biggest and fastest in the tech world. According to leading figures from U.S. tech companies, this trend continues. When these companies are asked what they expect the biggest growth drivers for their revenue growth over the next 24 months, the top answer consistently given among 111 tech executives surveyed by KPMG was mobile, software, and hardware.

The chart also shows growth opportunities that include healthcare IT, Big Data, and cloud storage.

Significant growth is expected in the IoT (Internet of Things) sector which includes wearable tech and smart-home devices and sensors.  I suspect by next year we will see a larger number in the IoT bar of this graph.

accenture.com did a study on using the IoT to drive business strategies and reports, “The conditions are ripe for the widespread adoption of the IoT; a proliferation of data-rich sensors and devices that open up connectivity and a universal demand for faster, more efficient ways to work and live.”

In a survey of 1400 decision-makers, of which half are CEOs, Accenture found that 87% of executives believe that IoT will bring long-term job growth and 57% see it driving long-term revenue growth.

We will be looking at products that fall under the Internet of Things umbrella at CES in a few days and will pass on what we learn to you here at CupertinoTimes.com.