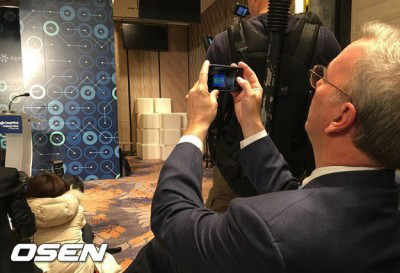 Earlier this week, former Google CEO and current Alphabet Executive Chairman Eric Schmidt was present in South Korea for a press event where he was seen taking photographs using an iPhone.

Schmidt was present in Seoul for an epic contest of go between Google’s artificial intelligence system DeepMind AlphaGo and Go champion Lee Se-dol. The result of the popular Chinese board game was rather unpredictable as Google DeepMind defeated Go champion Lee Se-dol twice. But what was even more surprising, was the fact the Alphabet executive was using an Apple iPhone instead of using Google’s powerful smartphones like Nexus 5X and Nexus 6P or any other Android handset.

Osen spotted Eric Schmidt using a device which seems to be an iPhone 6 or iPhone 6s to snap photographs. Although some of the Android phones resemble iPhone in appearance but the device in Eric Schmidt’s hands is unmistakably an iPhone. Schmidt has also been seen using the iPhone’s Camera app and selecting a photograph to share, either via email or text message or otherwise.

Seeing Schmidt use an iPhone instead of an Android device may come as a shocker to some but it is not totally new as the American software engineer is quite famous for his candid behavior. For example, well after the launch of Android, Schmidt continued to use a BlackBerry because he preferred the gadget’s “physical keyboard”.  Moreover, despite the intense rivalry between the two tech giants, Google continues to rely heavily on the Apple products to deliver its goods and services. In fact, court documents recently revealed that back in 2012, Google paid Apple $1 billion to be the default iOS search provider in Safari.

In a similar vein, the memory of catching Microsoft Windows Phone VP Joe Belfiore tweeting from an iPhone still remains fresh. When asked about the choice of gadget, Belfiore explained the importance of understanding the competition.

“On a 9-month leave-of-absence, I have a HUGE AND UNUSUAL opportunity to get to know these products deeply. To understand the benefits and drawbacks of a full ecosystem like Windows, Android, iOS — you have to LIVE IN IT. You have to feel its strengths and weaknesses, be let down, be delighted. And you can’t do that just “playing around” with a device for a couple of days. You have to learn the UI, upload your photos, use cross-device apps and tools… all of it.”