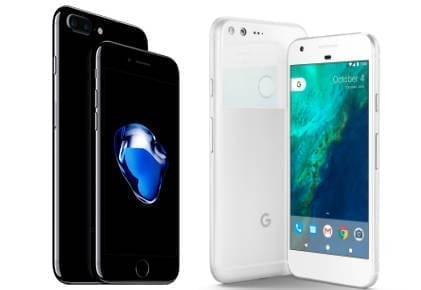 Well, let’s be real and accept the fact that Google has amazed everyone around the world with 2 handsets, 100% designed in terms of software as well as hardware by none other than Google itself.

Apple has been doing that for years, though, and every year it gives its loyal customers a reason to change their phones and also attracts millions of other customers as well.

This year has been all about Google Pixel vs iPhone 7, so let’s take a look at these big brothers here in this comparison of the Pixel XL and iPhone 7 Plus.

iPhone 7 plus and Google Pixel XL are very different in terms of design. The iPhone is sleek yet sturdy. The Pixel is way thicker and none of the two versions have a camera bump like the iPhone 7 has.

Both the Pixel XL and iPhone 7 Plus have a 5.5-inch screen, however, Google offers a much higher pixel density as well as resolution i.e 1440 x 2560 AMOLED as compared to iPhone’s 1080 x 1920. However, this isn’t that great a deal in real life usage of the handset as iPhone manages to look equally crisp. The difference can only be observed when Day Dream view or VR is used.

What if you have small hands? How does that affect the interface here?

We have to admit that the phones ARE big and on the iPhone 7 plus, what you need to do is double tap the home button, this way the screen slides and becomes good for one-handed operations. While the Pixel XL won’t do much to help you in such a case.

The Pixel XL has Snapdragon 821 with 4GB of RAM and iPhone 7 Plus has another A10 fusion chip and 3 GB of RAM. If you are crazy about multi-tasking then iPhone 7 Plus wins here because of that extra bit of RAM, but overall both the phones deliver fast performance and work equally well.

These phones support both GSM and CDMA-based carriers, and there are reversible ports on both the Pixel XL and iPhone 7 Plus.

The Pixel XL does have the edge of being able to charge other USB type C devices over its port.

What needs to be noted here is that this extra battery is consumed by the Pixel XL to manage the amazing resolution it gives its users. iPhone 7 does win here because the Pixel Xl could discharge in under two hours.

This was a brief comparison of the Pixel vs iPhone 7 which we find equally fantastic and have tried presenting you with some major differences.