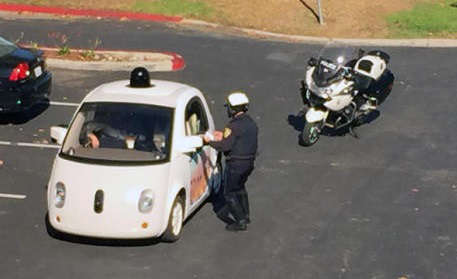 The Google Car gets busted in Mountain View, CA near the company’s headquarters for driving too slooow on Thursday.  The Police pulled the self-driving car over when they noticed cars accumulating behind the self-driving car and slowing down. The Google car was traveling at a blistering 24 miles per hour in a 35 miles per hour zone.  Google’s bubble car is a common sight in the area, but this is the first time it has been pulled over to my knowledge.

A local gentleman named Aleksandr Milewski witnessed the incident and took a picture of the traffic stop and posted it to Facebook, which we are sharing here.

Compared to the other self-driving cars under development the Google Car is not very attractive, resembling a hard boiled egg on four wheels. Perhaps the shipping version will be more appealing.

I would think we’re getting pretty close to seeing a self-driving car, after all, last year Audi sent  their A7 Sportback self-driving car from Silicon Valley to Las Vegas on a 520-mile road trip. I’m hoping to see some self-driving cars at the 2016 CES.  I understand that last year Mercedes showed off their F 015 at CES.  In a CES keynote Mark Fields, Ford CEO  said, “Ford will produce an autonomous driving car for the masses who can’t afford Audi/BMW/Mercedes level pricing”. That’s great news.

Although I may inject a little humor at Google in this post, it’s all in fun.  I have the utmost respect for what Google, Apple and other developers are working on in an effort to provide us with clean, safe, driverless and affordable vehicles in the coming years that will stop polluting the air we breath. I just hope the shipping versions will be somewhat attractive and affordable to the masses.

We can only hope that Apple is thinking along those same lines and plans to release an Autonomous, affordable car “for the rest of us”. I am hopeful that this new transportation technology doesn’t just become another expensive toy for the elite, leaving the rest of us to drive the status-quo.

We’ll see what happens and you can rest assured that we will be talking about it here.