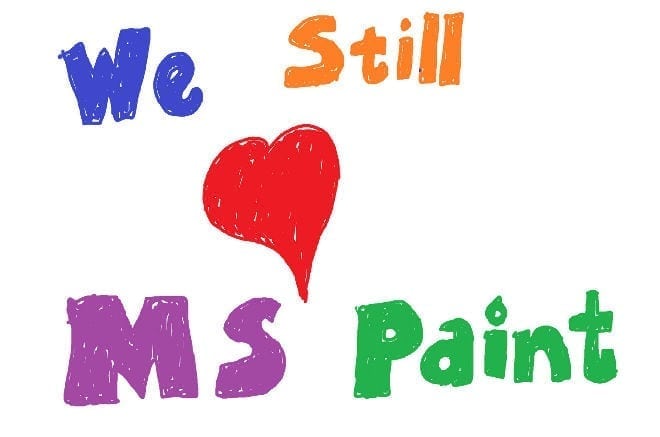 In 1985 Microsoft released MS Paint and it has been a part of the Windows operating system ever since.  That is 32 years which is a pretty good run for a software application.

An announcement was made last Monday saying that MS Paint was among depreciated features in the Windows OS and would no longer receive updates. This sounded like Microsoft was going to let it basically die on the vine. Well, the result was much blowback from users.

A flood of tweets with hashtag #RIPMSPAINT convinced Microsoft to rethink its position on the matter.

On July 27th the Microsoft Blog reported, “Today, we’ve seen an incredible outpouring of support and nostalgia around MS Paint. If there’s anything we learned, it’s that after 32 years, MS Paint has a lot of fans. It’s been amazing to see so much love for our trusty old app. Amidst today’s commentary around MS Paint we wanted to take this opportunity to set the record straight, clear up some confusion and share some good news:

MS Paint is here to stay, it will just have a new home soon, in the Windows Store where it will be available for free.

Paint 3D – the new app for creativity, also available for free with the Windows 10 Creators Update, will continue to get new feature updates. In addition to the new 3D capabilities, many of the MS Paint features people know and love like photo editing, line and curve tools, and 2D creation are in Paint 3D.

So, thanks for all the MS Paint love, keep the feedback coming via the Paint 3D app, and keep creating!”

After the dust settled

After the dust settled it was clear that this beloved app was not going away. It was just moving to the Windows Store.

Paint 3D was released in the Fall of 2016 and was part of a huge upgrade for Windows 10. I supposed it was expected to replace Paint which makes sense to me since much of its capabilities are in Paint 3D.

MS Paint will be made available in the Windows Store for free. It will also continue to receive new updates.  So with this, I suppose Paint fans can breathe a sigh of relief.

Microsoft also had Outlook Express and its Reader app on the depreciated features cull list. Neither of these apps received any protest from Windows users.