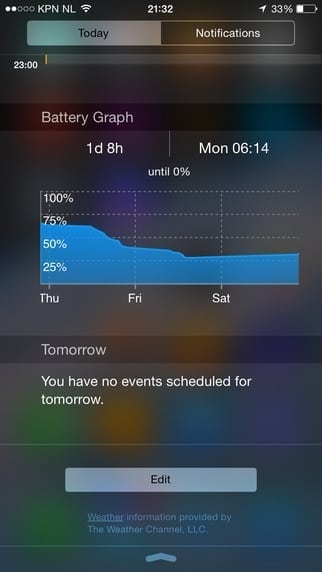 Graphs make it easy to understand large data-sets. For people who like to micromanage their battery usage on iOS, we recommend Battery Graph widget to see battery levels over time in the form of a customizable graph. Check it out after the title image!

Android has had detailed battery usage statistics for the longest time. iOS users have longed for a similar feature for an equally long time; our wish was granted recently with iOS 8’s Battery Usage menu. In typical Apple fashion, the battery usage statistics are presented in a simplified manner: you can see what percentage of your battery was used by a particular app in the past 24 hours, or last 7 days. No fancy graphs, or a break-down of which particular hardware component takes the greatest toll.

For people who wish to see a nice graph of how their battery percentage decreases over the day, we recommend Battery Graph widget for iOS 8.

Developed by Lubos Mikusiak, Battery Graph is a standalone widget app for iOS 8 which, you guessed it, shows your battery level over a specified period of time in the form of a pretty graph. It also predicts how long before your battery will finish, estimated on past usage patterns.

You can customize the color of the graph, the use of gradients, vertical, and horizontal grid lines from the Battery Graph app. Additionally, you can change the duration for which the battery level graph will be drawn: last day, last week, or last month. Once done, you can add the widget to Notification Center.

Battery Graph is available as a $1.99 download. It goes without saying, but this works only on iOS 8 iPhones and iPads.