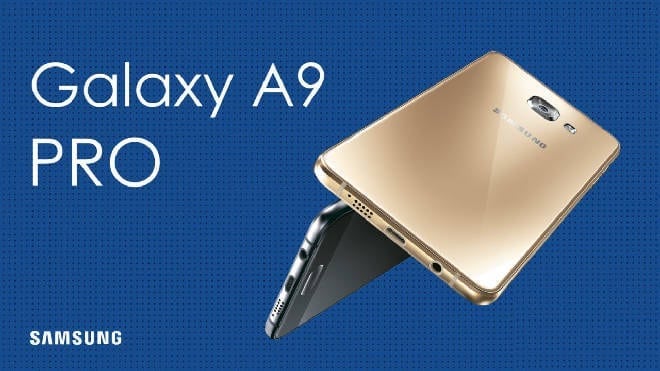 In 2015, Samsung introduced the Galaxy A9 smartphone. The company introduced a newer version of the phone Galaxy A9 Pro in March 2016. This phone, however, was only launched in China. According to rumors, the phone will now be introduced in other countries as well.

Galaxy A9 Pro is now available on Indian import and export tracking website Zauba. This suggests that Samsung may introduce a non-Chinese version of the handset to additional markets.

Galaxy A9 Pro Specs and Features

Galaxy A9 Pro has model number SM-A910F. The handset has a 6-inch Full HD Super AMOLED display with a resolution of 1,920 x 1,080 pixels. Corning Gorilla Glass 4 is used for screen protection.

Galaxy A9 Pro gives its users a premium feel with its sleek metallic design. Users can also enjoy a long lasting battery life with the 5000 mAh battery. Galaxy A9 Pro brings great camera features to its users. It not only captures beautiful outdoor but also indoor images with LED flash and optical image stabilization (OIS). The phone showcases a 16-megapixel rear camera with autofocus. It also features an 8-megapixel front camera for your video chats and selfies.

Users can enjoy the latest Google features with Android 6.0 Marshmallow Operating system. The device was available for of 3,499 Yuan, or about $533 in China. Users would hope to see the phone available for the same price in Europe and other regions.

We don’t yet know the markets in which the phone will be introduced. However according to reports Zauba has started taking pre-orders for the device.

We should remind you here that these are just rumors. The company has not officially announced the release of A9 Pro outside China.