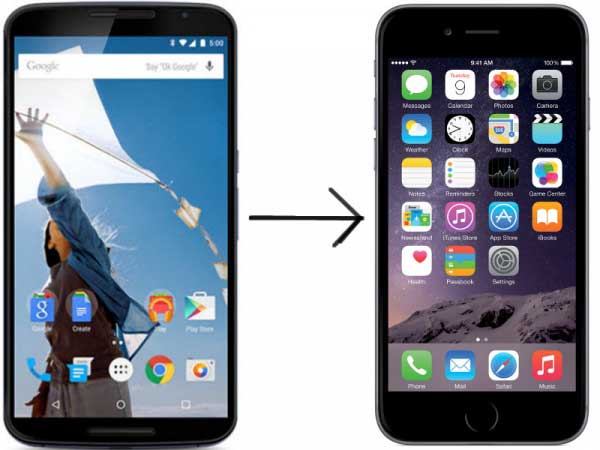 From Android To iOS

The iPhone is making headway into other markets, causing many Android users to migrate to Apple. Tim Cook eluded that 30% of the iPhone sales, totalling 48 million units, during the last quarter consisted of former Android users. Meaning that approximately 14.4 million Android users bought iPhones and became Apple fanboys. The 99% increase in sales that Apple has experienced in China may be a contributing factor in Android users defecting to iOS

The purpose of this article is not to debate the numbers. However, we will look at some of the possible reasons why Android users may switch to iOS.

One of the main reasons for utilizing smartphones is being able to work smartly, by having a high degree of functionality (i.e. word processing, mail, social media, internet access, etc…) simply accessible. You don’t want to have to constantly refresh yourself on how to navigate your OS and perform desired functions. You should not need to have an IT or Computer Science degree to be able to use a smartphone. Simplicity is designed into smart devices to enable every user with the means to make their lives more integrated and easier. Android’s UI and OS has become simpler (and user-friendly) over time. This makes Android more user-friendly than Windows for smartphone users. However, Android is still more complicated than iOS. Apple has always stressed simplicity in its iOS design, making it more applicable and attractive to a wider demographic of users.

The iPhone seems to get an iOS update yearly. However, the same cannot be said for Android. The slow rollout of an OS negatively impacts a smartphone’s desirability and the willingness of users to hold onto their devices. This is especially true for Android as an open source OS. Developers develop apps according to the required best available tech specs and OS capabilities. It is understandable (but still a bit annoying) that you would have to purchase a newer smartphone to be able to use the latest apps. However, it is a slap in the face when you can’t use the latest apps (which you want and/or need) because you are waiting (sometimes longer than promised) on an OS update. Bear in mind that smartphone contracts last for 24 months – this is when users decide on either upgrading or entering into pay-as-you-go agreements. Making the date, or lack thereof, on which the latest OS released a deciding factor between sticking with Android or migrating to Apple.

Spikes of lag and sputters in performance are part of the experience in using technology. But the general expectation and rule is that: as technology progresses, performance should increase, and lags and sputters should annoy us less. Both Android and Apple have smoothed out their respective smartphone’s performance, OS, and UI. However, iOS is smoother and retains that fluidity after subsequent iOS updates.

My first phone was a Nokia 3210, and I remained a Nokia only guy for many years. What made me migrate to Android was Nokia’s backward navigation concept. Today, I use an iPhone and am a proud Apple fanboy. Why, you ask? The reason is that I prize simplicity and reliability above all else. Apple has given that to me. If you want to be able to customize your smartphone, then go with Android – but don’t be surprised that your tinkering causes some hiccups. Apple has given me the freedom to do what I do on my MacBook or iOS device.