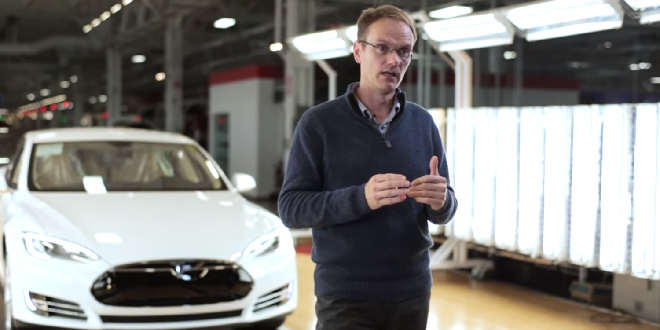 Apple has recruited former Tesla Vice President Chris Porritt, most likely for taking over their so called “special projects”. Tesla is undoubtedly a giant in the automobile and the tech world and its name is frequently seen in the headlines, especially after the release of the autopilot software. But the cause of Tesla’s name on the news these days is mainly due to different companies employing Tesla’s former employees.

Apple and Tesla have a history of exchange in terms of their ex-employees, to which Elon Musk from Tesla facetiously commented,“we always jokingly call Apple the ‘Tesla Graveyard.’ If you don’t make it at Tesla, you go work at Apple.”

Considering Porritt’s former position at Tesla one can not be certain of what led to his discharge from the automaker. There might be more to this than meets the eyes. However, when hiring the engineer in 2013 Elon Musk commented:

“Tesla is a hardcore technology company, which means that anyone leading a team of engineers must be an outstanding engineer themself, as well as a good leader. Chris demonstrated exactly that in his prior role at Aston Martin, creating in the One-77 what was arguably their best car ever.”

Credible sources had confirmed that Apple’s executive, Steve Zadesky was leading a car project called Project Titan however now that Zadesky has left the Cupertino-based company, there is an opening for his position. For all we know, maybe this is that “special project” for Porritt.

Chris Porritt Vice President of Vehicle Engineering at Tesla left the company in September  2015 and now is hired by Apple. Apart from Tesla, he also has worked with various other car companies like Land Rover and Aston Martin. Porritt has a vast experience and understanding of the sophisticated matters of the automobile industry and this is exactly what Apple needed at the moment.