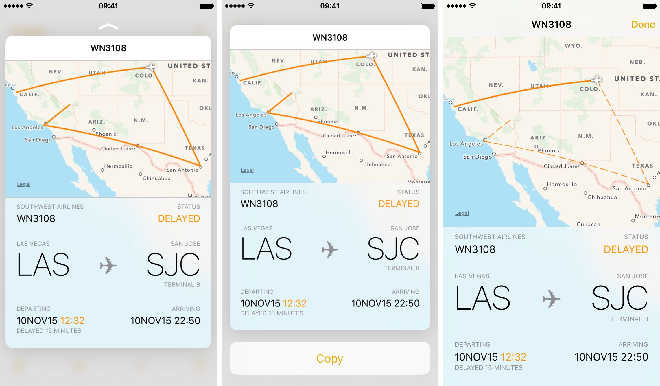 Apple’s new operating system iOS 9 and the OS X 10.11 El Capitan got updated recently and the best of the features is that there are data detectors for flight information which makes flight tracking possible now.

These detectors allow iPhone, iPod touch, iPad and Mac owners to look up the information on flights quickly and efficiently through notes, messages and emails. You can use flight trajectory, flight status, arrival times of flights and other kinds of information.

In this article, you will learn to preview quickly the status of an airline and flight number, whilst you are doing something else on your phone.

iOS’s data detectors only support previewing of flight information through either Mail, Messages or Notes.

For iPhone, iPod touch and iPad:

Step 3: Press firmly on a link in order to Peek a flight. Now either slide your finger upward to send the flight number to system clipboard or press harder to open the flight preview view.

If your MacBook comes with a Force Touch-enabled track pad, you can use the same steps as with 3D Touch on the latest iPhones.

Through the interactive flight preview, you can see updates live, regarding your flight. This includes maps with a projected trajectory of the flight and any relevant information about delays etc which are also updated in the moment.