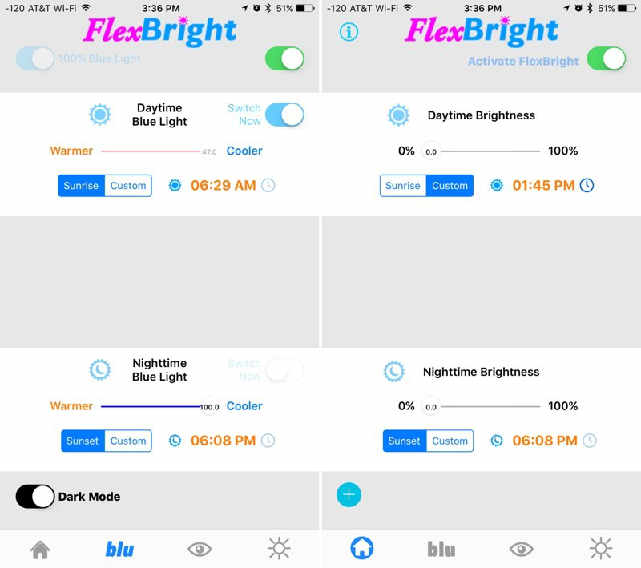 Apple has finally authorized FlexBright for iOS devices. This application is quite handy as it allows the user to adjust the display temperature to their needs, at different times of the day. But the feature has to be activated manually after receiving a notification from the application. Apple is providing a similar function by the name ‘Night Shift’, which is expected to be released in the iOS 9.3. However the ‘Night Shift’ doesn’t need to be operated by hand like FlexBright.

The application, which is created by Intelligent Apps, allows the user to control the temperature of their iPad and iPhone as well as the brightness of the display. Thus enabling to maintain the amount of blue light to a healthy ratio. FlexBright became the first ever third party app to be allowed on an iOS device.

FlexBright remains active in the background and as the time of day changes, it notifies the users to alter the level of brightness or blue light according to their already set choice at sunset. Keep in mind that this app has a wider range of yellow shades compared to that in Night Shift mode in the iOS 9.3 .When activated FlexBright app adjusts the brightness to a user-defined value. The application provides users with toggles for adjusting how dark or bright the screen is supposed to be, there is a toggle for a dark mode which turns the screen black and white; sort of like the gray-scale mode (in Accessibilities Setting). The user can also alter the yellow light of the screen to their liking and choose a suitable time to be notified (somewhat like an alarm). You’re probably wondering why Apple approved of such an app? The only major reason is the notification system while the application runs in the background throughout the iOS operating system. As quoted by one of the developers, the app uses a “ native objective-c library that filters the blue light from the iOS screen”. This application doesn’t utilize private API to alter the screen temperature.

It is important to highlight that FlexBright is available for a much larger range of devices, especially the ones that are incompatible with Night Shift mode. It also runs in many older versions of iPhone such as the iPhone 5. Moreover, Night Shift mode is restricted to devices with iOS 9.3 whereas FlexBright is compatible with iOS 7 & 8. It is interesting to note that a few months ago Apple denied the application f.lux into the App Store which was an application that provided almost the same functions as FlexBright. F.lux allows the users to alter the blue light and the display temperature of their Mac, changing the screen display to a much warmer yellow during the evening.The developers of f.lux launched an iOS compatible version but it was refused by Apple as it was side-loaded on devices with X-code due to it having private APIs. The developers have asked Apple to give them access to the Night Shift feature as making a f.lux app is impossible with Apple’s existing tools.

As for FlexBright, it is available on the AppStore for only $2.99, FlexBright has many ups and downs but it is a win for those who can’t update their Apple devices to iOS 9.3 and avail the Night Shift mode.

UPDATE: FlexBright has been removed from the App Store. No explanation for the removal has been provided by Apple at this time.