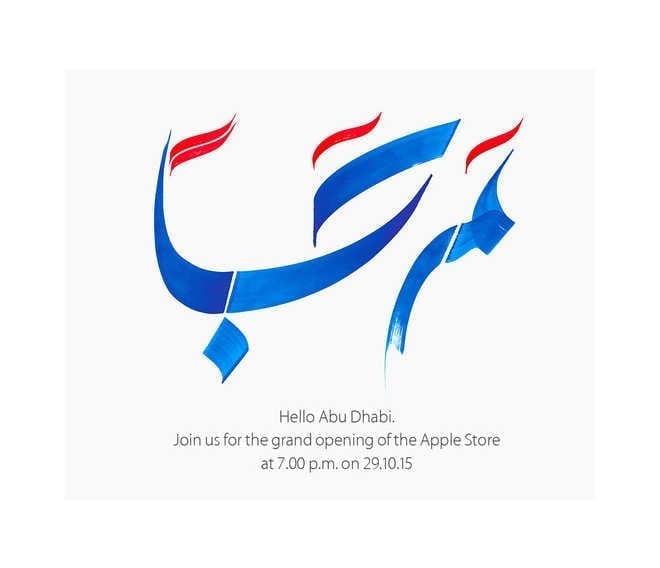 Apple has recently announced that the first two of its retails stores in the Middle East will be opening in Abu Dhabi and Dubai. (These are two of the most populous cities in UAE) The stores will open on October 29, 2015.

The new Dubai based store will open in the Mall of Emirates in the place of the now vacated Vox cinema. The grand opening will be celebrated at 1600 hours local time. The Abu Dhabi based store will open in Yas Mall and it’s grand opening will be held at 1900 hours, local time.  The spaces are now barricaded by creative barricades which have reportedly been made by an Arabian artist, Samir Sayegh, especially for the spaces. These barricades feature the Arabian word for ‘hello’ or ‘marhaba’.

The store timings for both of the Apple retail stores will be between 1000 hours and 2200 or 2400 hours. The stores will include exciting product workshops as well as the very famous Genius Bar.

Rumors of Apple building the World’s largest Apple Store in Dubai have been rampant since August 2014. The hiring for the UAE stores began in the same month last year. Tim Cook, the Chief Executive Officer of Apple, visited the UAE in February last year to discuss and talk about the future of UAE’s IT sector with the Vice Minister and ruler of Dubai Shaikh Mohammed bin Rashid Al Maktoum, Sheikh Mohammed bin Zayed (Crown Prince of Abu Dhabi) and the Deputy Supreme Commander of the Armed Forces.

Apple Watch will also be available in Saudi arabia and in the UAE from October 22. This is due to the wristwatch’s eighth launch wave which will allow Apple enthusiasts to get their hands on this device a week before the official opening pf the Abu Dhabi and Dubai stores.

The pricing for Apple Watch Sport is going to be valued at 1,399 dirhams for the 38mm model. This is equivalent to almost 380 USD.

Apple has also been given an exemption from the foreign ownership laws of UAE. This means that the technology company will be able to retain the full and complete ownership of any and all operations in the UAE.