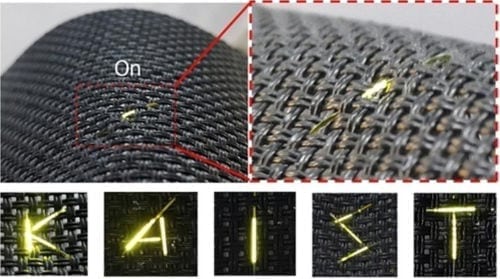 When we think about glowing fibers, we think about luminescent paint or strips of LEDs strewn on to the fabric at a later stage. These are often seen in fashion shows but all of them are pretty much the same. All of that is about to change with the new Fibre OLED fabric.

Professor Kyung Cheol Choi from the School of Electrical Engineering at the Korean Advanced Institute of Science and Technology (KAIST), led the team responsible for the successful fabrication of the highly efficient Organic Light-Emitting Diodes (OLEDs) on an ultra-thin fiber.

The problem with OLED wearable displays until now has been that they don’t exhibit the same level of performance they do on the fabric that they do on planar surfaces. The team from KAIST set out to find a solution to this problem and they succeeded. They designed a structure of OLEDs compatible to fiber and used a dip-coating method in a three-dimensional structure of fibers.

This method allowed the team to successfully develop efficient OLEDs that are equivalent to planar surfaces. Thee are set to last a lifetime. The team discovered that by using this method, the planar OLEDs can be applied to fibers without having an effect on their performance. Their luminance and current efficiency were measured over 10,000 candela per square meter and 11 candelas per ampere respectively.

Furthermore, what makes this discovery even more noteworthy is that fact that the OLEDs were able to withstand tensile strains of up to 4.3 %. They were still able to retain more than 90% of their current efficiency. They can be woven into the clothes directly or knitted into pre-prepared clothes without having their functionality compromised.

Another feature worth discussing is the fact that the entire process is carried at a low temperature of roughly 105 degrees Celsius. This means that the fibers that are not able to withstand high temperatures can also make full use of these OLEDs. Furthermore, the OLEDs can be fabricated on extremely thin fibers ranging from 300 micrometers to 90 micrometers, which is thinner than a human hair.

The research was published online in the international journal for nanoscience, Nano Letters in early December and was led by PhD candidate Seonil Kwon.

ClothingEngineeringFibre OLED FabricOLED
Previous ArticleVivo X20 Plus UD Brings In-Display Fingerprint Sensor Not AppleNext ArticleWhat is the Alliance for Open Media and Why did Apple Decide to Join?