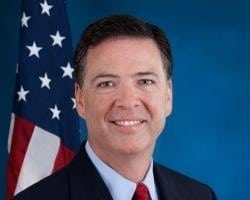 The Director of the FBI James Comey, has tried to address concerns regarding privacy rights and user security with regards to FBI’s requests that Apple should try to bypass iOS encryption to access data in a handset that was used by one of the perpetrators of the San Bernardino shootings. “The San Bernardino litigation isn’t about trying to set a precedent or send any kind of message,” Comey said in an editorial piece on the Lawfare blog on Sunday. “It is about the victims and justice. Fourteen people were slaughtered and many more had their lives and bodies ruined. We owe them a thorough and professional investigation under law.”

This piece by Comey comes on the heels of Apple CEO Tim Cook publishing a memo to the Apple website which explained his reasons for opposing the request by government officials. He noted that Apple is unable to break the encryption on iOS 9 and even if they did this would set a dangerous precedent for law enforcement along with significantly undermining the security of Apple users.”Once created, the technique could be used over and over again, on any number of devices,”Cook wrote in a letter last week.

Comey had responded to this by saying that “the particular legal issue is actually quite narrow. The relief we seek is limited and its value increasingly obsolete because the technology continues to evolve.”  Comey writes, “We simply want the chance, with a search warrant, to try to guess the terrorist’s pass code without the phone essentially self-destructing and without it taking a decade to guess correctly. That’s it. We don’t want to break anyone’s encryption or set a master key loose on the land.”

The editorial comes after the news that the government had called upon the owner of the handset, the San Bernardino County Department of Health to change the pass code on the iPhone. Apple is expected to respond to the court order by Feb 26.