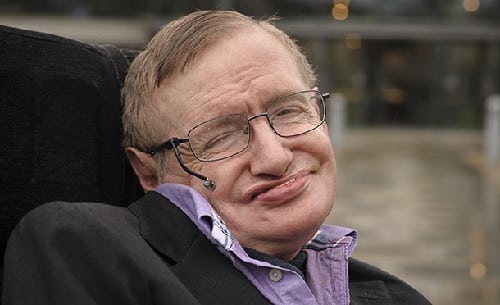 Intelligent life on earth took a big hit this week. Professor Stephen Hawking passed away peacefully at age 76 on Wednesday. Stephen Hawking was one of the greatest minds of our time and had an extraordinary life. Part of his extraordinary life was portrayed in the film, “The Theory Of Everything”. He was a world renown physicist, cosmologist, and author. As deep and serious as these subjects are, Mr. Hawking was well known for his sense of humor.

Professor Hawking spent much of his adult life as a quadriplegic caused by motor neuron disease. As a young man, before he was stricken by this disease, he enjoyed horseback riding and rowing. He became ill in his early twenties while attending Cambridge. His doctors did not believe he would live past a couple of years. Fortunately, the disease progressed slowly allowing him to marry and have three children.

Professor Hawking was known for his synthesized voice and the technology he used to communicate.  He lost his natural voice in 1985 when a life-saving tracheotomy was performed. In 1997 he met the co-founder of Intel, Gordon Moore. Mr. Moore convinced Professor Hawking to switch to Intel computers. He had provided the professor with customized PCs and support and replaced his equipment every two years.

A Voice Through Technology

Professor Hawking used various technologies to communicate throughout the years. A device that allowed him to spell words using eyebrow movement. Later, he used a customized clicker connected to his wheelchair mounted computer. He used a “cheek switch” attached to his glasses. This allowed him to write emails, prepared lecture notes and author books. His first book, “A Brief History Of Time” introduced those of us with a layman’s interest in science to cosmology. It sold over 10 million copies.

As his condition worsened changes needed to be made to the tech he used to communicate. Many iterations of word prediction and speech synthesis technology were used to give Professor Hawking a less cumbersome way to communicate.

Throughout Professor Hawking’s life, he has received many awards, prizes, honorary degrees, and medals. He was awarded the “Medal Of Freedom” by President Obama. Such an intellect trapped inside an uncooperative body that refused to accept the limits placed on him. This alone says volumes about the man. Stephen Hawking’s life is an inspiration to all humanity. He is sincerely missed.

❝I don’t think the human race will survive the next 1,000 years unless we spread into space. There are too many accidents that can befall life on a single planet. But I’m an optimist. We will reach out to the stars❞ – Interview, the Daily Telegraph, October 2001